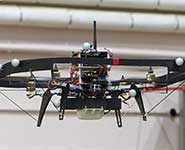 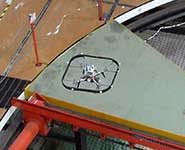 Researchers at the University of Bristol have collaborated on a flying radiation detector that could be used to help with nuclear decommissioning and clean-up at sites such as Fukushima and Sellafield and which was recently tested in a specially designed experimental area at the National Physical Laboratory.

Project RISER (remote intelligent survey equipment for radiation), a collaboration between the University of Bristol, Blue Bear Systems Research (BBSR), Createc, demonstrated at the National Physical Laboratory (NPL) and funded by the UK’s Technology Strategy Board, has been focused on the development and demonstration of a unmanned air system (UAS) based radiation survey system that could potentially be used in hazardous environments.

The tests at NPL involved placing gamma sources around the experimental facility and were the first tests with live sources of radiation, which enabled BBSR the opportunity to demonstrate the effectiveness of the technology.

A group of observers watched the aircraft navigate around a predetermined path whilst simultaneously mapping the environment and detecting radiation. The aircraft then revisited and investigated the areas where NPL scientists had positioned radiation sources by hovering over them to create a more detailed image.

Dr Tom Richardson, Senior Lecturer in Flight Dynamics and Control in the University’s Department of Aerospace Engineering, said: “For many radiation survey applications, the environments under investigation are complex and often within enclosed structures or buildings, so standard GPS based positioning and control is not suitable for unmanned aircraft system control.  The RISER project clearly demonstrates a potential route for UAS control system development and their use within these types of potentially hazardous environments.”

In project RISER, BBSR have collaborated with the University’s Department of Aerospace Engineering in order to use their systems to provide the detailed positioning data required for the development and fusion of navigation control laws. These have then been used to control the vehicle and have been optimised to support the radiation mapping provided by Createc.

RISER was a nine month project, progressing through design, development, testing and ending with the very successful live demonstration at NPL.

The University of Bristol, however, continues to work closely with BBSR on UAS mapping and exploration algorithms for UAS in projects such as precise navigation of UAS in the complex environment (PUCE).