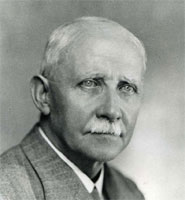 A documentary on the famous Bristol architect Sir George Oatley is being broadcast tonight [07 October] to mark the 150th anniversary of his birth in 1863. Professor Mark Horton, of the Department of Archaeology and Anthropology at Bristol University, will give an insight into Oatley’s work and life on Inside Out West, BBC1 at 7.30pm.

Professor Mark Horton, of the Department of Archaeology and Anthropology at Bristol University, will give an insight into Oatley’s work and life on Inside Out West, BBC1 at 7.30pm.

The film visits many of his most important buildings in the city and the University from the late 19th and early 20th centuries.

Described as the last 'Victorian Architect', Oatley was responsible for some of the grandest buildings in the city including the Wills Memorial Building, the Bristol Baptist College and St Monica's Retirement Home.

His style was a mixture of medieval Gothic, Elizabethan, and vernacular; all were completed to the highest quality of workmanship, in the tradition of the Arts and Crafts movement.

The Wills Memorial Building was commissioned in 1912 and Oatley produced an imposing design in the Perpendicular Gothic style, which was to become the last great Gothic secular building to be built in Britain. Building started in 1915, and after being delayed through World War I, it was finally completed in 1925.

His other work for the University included the H.H. Wills Physics Department, The Baptist College on Woodland Road, Wills Hall in Stoke Bishop and Manor Hall in Clifton.

Oatley was also responsible for a number of church and chapel restorations, including the New Rooms in Broadmead - the oldest Methodist chapel in the world.

Although he was knighted by George V after the opening of the Wills Memorial Building in 1925, he remained a very modest man, shy of publicity, and for this reason his work is very little known outside Bristol.

Professor Horton said: “In this film we are hoping to make Oatley's work better known to a wider audience. Working in one of his buildings makes one realise what a genius he was, and how he shaped so many landmarks of the University and the city.”

The film will also feature author and University of Bristol graduate Sarah Whittingham, who has written a biography of Oatley, and Dr Brian Pollard, who tours HH Wills Physics Laboratories.

The programme is available to watch again [until Sunday 13 October] on BBC iplayer.