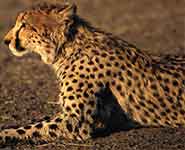 New research by the universities of Bristol and Princeton has found certain animal species are capable of co-ordinating their spatial behaviour to cover terrain by maintaining areas of exclusive use while sharing other regions of space with their neighbours.

The joint study by Luca Giuggioli and Jonathan Potts from the University of Bristol, and Daniel Rubenstein and Simon Levin from Princeton University shows that animals deposit marks wherever they go to show their presence, and retreat from marks left by a member of the same species more quickly if the encountered mark is recent.

The study published today [30 September] in the Proceedings of the National Academy of Sciences (PNAS) has important implications for how epidemic disease spreads and animal sociality.

Lead author, Dr Luca Giuggioli of Bristol's Department of Engineering Mathematics and School of Biological Sciences said: “Movement phenomena are among the most basic characteristics of an animal’s life.  Understanding the causes and consequences of organism movement requires merging tools and ideas across different disciplines.

“This study shows the similarities between the mechanisms of environment-mediated interaction with which an insect colony may find resources and those with which a population of animals segregate in space by forming territories and home ranges.

“By viewing animal space use processes as a decentralised co-ordination of tasks, we provide a novel platform to develop more efficient algorithms to control robots in search and rescue operations, environmental monitoring and surveillance.”

Identifying how population level patterns emerge from the local rules of interaction between individuals is key to the development of bio-inspired technologies and is a research theme at the Bristol Centre for Complexity Sciences, where part of the study was carried out.

The research team’s approach rested on the knowledge that animals communicate by modifying the environment in which they live, providing a method to analyse social cohesion as 'stigmergy', a form of animal-animal interaction mediated by the changes imparted to the environment by the wandering individuals.  This is the first time the concept of stigmergy has been used beyond the area of eusocial insects.

The type of stigmergic co-ordination studied here is of direct relevance for the deployment and decentralised control of robotic swarms, and is a topic of great interest in the emerging area of research called Movement Ecology.

By considering a population of animals that mark the terrain as they move, the researchers predicted how the spatio-temporal patterns that emerge depend on the degree of stigmergy of the interaction processes.

In so doing, the team quantified animal decision-making processes in terms of current and past locations of other individuals, linking behaviour to history-dependent actions.

Taking into account the movement and interaction of individuals in different social units and neighbouring marked areas, the researchers conclude it would be possible to show how the spatial extent of an epidemic outbreak is affected by the degree of spatial overlap of the individuals in a population.