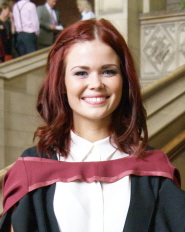 Former University of Bristol student Lindsey Russell says she’s ‘living the dream’ after winning a competition to be the next Blue Peter presenter, just a week after graduating. Lindsey, 22, was overwhelmed when she was announced as the winner live on CBBC last night [25 July], beating 20,000 entrants to secure the dream job.

Lindsey, 22, was overwhelmed when she was announced as the winner live on CBBC last night [25 July], beating 20,000 entrants to secure the dream job.

It marks the end of a whirlwind month, with filming for the first stages of the new ‘Blue Peter – You Decide!’ show taking place between her final exams.

Lindsey, from Oxford, said: “This whole experience has been incredible and overwhelming – it’s just ridiculously amazing. I’ve been so determined throughout and I’m literally living my dream. It’s been hard to take it all in.”

Ten people were shortlisted for the post, undergoing a series of challenges designed to test some of the key skills a budding Blue Peter presenter will need to succeed.

Lindsey ate a deep-fried cockroach, presented on a rollercoaster and even broke a world record – all in two weeks.

After four episodes, Judges Myleene Klass, Eamonn Holmes and Ceallach Spellman whittled the candidates down to the top three – Lindsey, Ben Hunte and Freddie Ingelby – before placing the decision in the hands of CBBC viewers, who voted online for their favourite.

The CBBC audience watched as Lindsey and her fellow finalists found out the results of the audience vote as they joined Barney Harwood and Helen Skelton on stage for Blue Peter’s broadcast from CBBC’s Live in Leeds event.

Now, Drama and French graduate Lindsey will be the famous children’s programme’s 36th presenter when she starts presenting the show in September.

Professor Sarah Street, Professor of Film and Foundation Chair of Drama at the University of Bristol, said: “We’re absolutely delighted that Lindsey has won. It’s a remarkable achievement considering that she was one of 20,000 applicants, not to mention that the majority of filming was during her final exams.

“It’s a dream job and Lindsey has shown that she’s the best candidate, always willing to give things a go and smiling throughout. The whole University, especially her tutors in Drama and French, is very proud of her and we look forward to seeing more of her on our screens.”

Lindsey credits her success to UBTV, the student-run television station, who helped put together her show reel and entry. She’s been involved in over 20 of their videos on YouTube to build up experience and presenting skills.

To see the moment Lindsey was announced as the new presenter of Blue Peter visit BBC iPlayer, where the programme will be available for the next seven days.