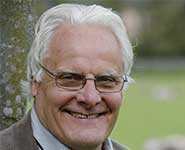 John Webster, Emeritus Professor in Animal Husbandry, from the School of Veterinary Sciences, has been recognised for his outstanding work promoting animal welfare and has been awarded an honorary degree by the Royal Veterinary College.

Professor Webster was presented with the Universities Federation for Animal Welfare(UFAW) 2013 Medal for Outstanding Contributions to Animal Welfare Science at its international symposium in Barcelona on July 4.

The winner of the award receives a cheque for £3,000, a commemorative medal and a framed award certificate.

A UFAW spokesman said: “The UFAW Medal recognises exceptional achievements of individual scientists who have made fundamental contributions to the advancement of animal welfare over a number of years.

“The award is open to individuals, anywhere in the world, whose research, teaching, service and advocacy have significantly benefited the welfare of animals. UFAW was very pleased this year to recognise the remarkable achievements of John.”

The UFAW Medal for Outstanding Contributions to Animal Welfare Science is a prize award to recognise the exceptional achievements of an individual scientist who has made fundamental contributions to the advancement of animal welfare over a number of years. The award is open to individuals whose research, teaching, service and advocacy has had international impact and significantly benefited the welfare of animals. Nominated candidates may be based in the United Kingdom or elsewhere.

Last week [Wednesday 17 July] Professor Webster was awarded the honorary degree of Doctor of Veterinary Medicine, honoris causa, at a graduation ceremony for students of the Royal Veterinary College.

Professor Webster is a former member of the Animal Health and Welfare Panel of the European Food Safety Agency.  He was responsible for establishing a unit for the study of animal welfare and behaviour at the University of Bristol's Vet School.  The Animal Welfare and Behaviour Group is an international centre of expertise and now the largest such group in the world.  He was also a founding member of the Farm Animal Welfare Council and one of the first proponents of the concepts of the five welfare freedoms.

Professor Webster has also recently published a new book.  Animal Husbandry Regained: The Place of Farm Animals in Sustainable Agriculture seeks to identify and explain the causes and contributors to current problems in animal husbandry, especially those related to 'factory farming', and advance arguments that may contribute to its successful re-orientation.

The first part of the book outlines principles and arguments necessary to engage with current problems - depletion of natural resources and destruction of environment, animal welfare, food and health, fair trade and sharing resources. The second part presents a series of proposals for change and development in animal husbandry, both in the developed world and subsistence agriculture.

Animal Husbandry Regained: The Place of Farm Animals in Sustainable Agriculture by John Webster is published by Earthscan from Routledge, priced at £24.99, ISBN-978-1-84971-421-1.