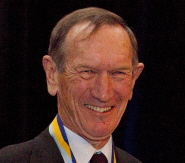 Professor Martin Lowson, Emeritus Professor of Advanced Transport and former Head of Aerospace Engineering, has died aged 75. Colleagues offer an appreciation of his life and achievements.

Martin Vincent Lowson was born in Totteridge, Hertfordshire, on 5 January, 1938, and was educated at Kings School, Worcester.  In 1955, he started an undergraduate apprenticeship with Vickers Armstrong (Weybridge) and saw first hand the manufacture of Valiants for the RAF.

His education continued at Southampton University, in the Department of Aeronautics and Astronautics, and he was awarded BSc, Hons (first class) in 1960 followed by a PhD in 1963.  As a postgraduate student he was part of the team from Southampton University which achieved the world’s first authenticated instance of human powered aircraft flight, when the team’s plane, the Southampton University Man Powered Aircraft, took off at Lasham Airfield in November, 1961.  Martin said ‘driving the chase car with the whole team aboard as the aircraft took off was an incredible thrill’.

His doctoral work in the University’s Aeronautics and Astronautics Department was on ‘The Separated Flows on Slender Wings in Unsteady Motion’.  Following the award of his PhD, he spent a year in the Institute of Sound & Vibration Research where he worked on aero-acoustics.  Three of his 1960s papers – ‘The Sound Field for Singularities in Motion’, ‘A Theoretical Study of Helicopter Rotor Noise’ and ‘Theoretical Analysis of Compressor Noise’ - are considered to be of fundamental significance in the theoretical understanding of noise generation. His lifetime contribution to the field of acoustics was recognised in 2011 by the  American Institute of Aeronautics and Astronautics Aeroacoustics Award.

He went to America in 1964 where he held the post of Head of Applied Physics at the Wyle Laboratories Huntsville until his return to the UK in 1969.  Whilst in the USA he worked on the Saturn V rocket for the Apollo Programme.   From 1969 to 1973, he was the Rolls-Royce Reader in Fluid Mechanics at Loughborough University.

In 1973, he was appointed Chief Scientist and later Director of Corporate Development for Westland Helicopters.  He is a co-patentee of the BERP rotor system which, mounted on a Lynx, gained the world speed record for helicopters in 1986.

Also in 1986 he made another career change when he was appointed the Sir George White Professor of Aeronautical Engineering at the University of Bristol.  The Department, set up in conjunction with the Bristol Aeroplane Company after the Second World War with Roderick Collar as the first Sir George White Professor, had gained an international reputation during the 1950s and 1960s.

The appointment of Martin Lowson to the Sir George White Chair was an inspired choice.  He set about re-invigorating the Department with a number of key appointments, notably Michael Wisnom and Ian Farrow in Structures, Steven Fiddes and Chris Allen for Computational Fluid Dynamics, Nick Lieven and Mark Lowenberg in Dynamics, and Ian Bond and Paul Weaver in Composite Materials.

The Department thrived under Martin’s leadership and by the end of his tenure as Department Head in 2000, its international reputation was secure.  Never content to be solely an administrator, Martin continued with his own research into very many and hugely varied themes and it is with one of these that the latter part of his life will be best remembered.

During the 1990s, his interest turned to ground based transport systems, attempting to understand why so few people used public transport.  His innovative idea was to give individuals in urban areas nearly all the freedom of movement of the car without the hassle of driving, ownership, parking, etc.  He set up his own company, ULTRA, in 1995 and for the period from 2000 onwards spent his waking hours promoting his Personal Rapid Transit scheme.

In 2005, the Company was awarded a contract to provide the transport system for passengers to transfer from the car parks to Terminal 5 at Heathrow.  This has been carrying paying customers for the past two years to commercial and passenger acclaim.  The company fully expect that this will be the first of many such schemes.

Martin was a Fellow of Royal Academy of Engineering, Fellow of the Royal Aeronautical Society, and Fellow of the American Institute of Aeronautics and Astronautics.  The latter organisation made him their Member Spotlight for June, 2011.

The many honours gained during his career include:

A funeral service will be held on Tuesday, 2 July at 11.30am at the Memorial Woodlands, Earthcott Green, near Thornbury, BS35 3TA. Professor Lowson’s wife Ann hopes to welcome as many of his former colleagues as can attend.

Please contact Margaret Piotrowska on Margaret.piotrowska@bristol.ac.uk if you plan to attend.