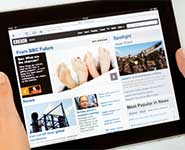 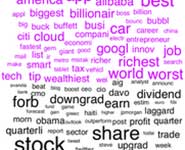 A word cloud based on Forbes magazine. The most popular words are coloured in pink, and the least popular in black.

Academics from the University’s Intelligent Systems Laboratory have analysed tens of thousands of articles available to readers of online news and created a model to find out ‘what makes people click’.

The researchers developed a model of “news appeal” based on the words contained in an article’s title and text intro, which is what a reader uses when they choose to click on a story.

The study by academics at the University of Bristol’s Intelligent Systems Laboratory is published in a series of publications.

The aim of the study was to model the reading preferences for the audiences of 14 online news outlets using machine learning techniques.  The models, describing the appeal of an article to each audience, were developed by linear functions of word frequencies.  The models compared articles that became “most popular” on a given day in a given outlet with articles that did not.

The research, led by Nello Cristianini, Professor of Artificial Intelligence, identified the most attractive keywords, as well as the least attractive ones, and explained the choices readers made.

The team created a model for each user group they had data on, including the BBC’s online news, Forbes and Australian newspapers.

After scoring articles by reader preferences, the researchers then ranked the articles by their appeal, and studied what might explain the choices made by online readers.

Professor Cristianini, speaking about the research, said: “We found significant inverse correlations between the appeal to users and the amount of attention devoted to public affairs.

The researchers examined millions of article pairs, collected over nearly eighteen months. The models analysed user choices, choices were then used to compare both the audiences and the contents of various news outlets.

The researchers found that there is a significant correlation between the demographic profiles of audiences and their preferences. They also found that content appeal is related both to writing style - with more sentimentally charged language being preferred, and to content with “public affairs” topics, such as “finance” and “politics”, being less preferred.

Further information about the study, together with word clouds of the most popular words for readers of Forbes magazine and the Australian website “news.com.au”, is available at mediapatterns.enm.bris.ac.uk/WhatReadersWant

A video about patterns in media content is available at www.see-a-pattern.org/?q=content/patterns-media-content

Professor Nello Cristianini is supported by the CompLACS FP7 project.