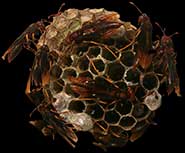 New research delivers a sting in the tail for queen wasps. Scientists at the University of Bristol have sequenced the active parts of the genome – or transcriptome – of primitively eusocial wasps to identify which part makes a queen or a worker.

The study, published in BioMed Central’s open access journal Genome Biology, shows that workers have a more active transcriptome than queens. This suggests that in these simple societies, workers may be the 'jack-of-all-trades' in the colony, transcriptionally speaking, leaving the queen with a somewhat restricted repertoire.

Studying primitively eusocial species like these wasps can tell us about how sociality evolves.  Dr Seirian Sumner from Bristol's School of Biological Sciences and colleagues sequenced transcriptomes from the eusocial tropical paper wasp Polistes canadensis.  All social species ultimately evolved from a solitary ancestor – in this case a solitary wasp, who lays the eggs and feeds the brood.  But how does this ancestral solitary phenotype split to produce specialised reproducers (queens) and brood carers (workers) when a species becomes social?

This paper gives a first insight into the secret lives of social insects.  It shows that workers retain a highly active transcriptome, possibly expressing many of the ancestral genes that are required for our solitary wasp to be successful on her own.  Conversely, queens appear to shut down a lot of their genes, presumably in order to be really good reproducers.

Long-standing analyses based on the fossil record holds ants and wasps in a clade known as Vespoidea, with bees as a sister group.  The researchers reassess the relationships between the subfamilies of bees, wasps and ants and suggest that wasps are part of a separate clade from ants and bees, though further genome sequences and comparative data will help to resolve this controversy.

The dataset offers a first chance to analyse subfamily relationships across large numbers of genes, though further work is required before the term Vespoidia could be dropped, or reclassified.

Dr Sumner said: "This finding would have important general implications for our understanding of eusociality as it would suggest that bees and ants shared an aculeate wasp-like ancestor, that ants are wingless wasps, and that bees are wasps that lost predacious behaviours."

This study suggests that novel genes play a much more important role in social behaviour than was previously thought.