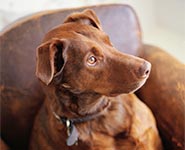 A study by academics from the School of Veterinary Sciences at the University of Bristol has gained new insight into domestic dogs’ fear responses to noises.

The research by academics from the School of Veterinary Sciences at the University of Bristol, and funded by the RSPCA, is published in Applied Animal Behaviour Science.  The study provides an important insight into dogs’ fear of noises, and could improve our understanding of behavioural signs of fear or anxiety.

In the study two approaches were taken to investigate the occurrence of, and risk factors for, these behaviours: a postal survey of dog owners to investigate general demographic factors and a structured interview of a sub-set of owners to gather more detailed information.

Almost half of the owners who were interviewed reported that their dog showed at least one behavioural sign typical of fear when exposed to noises such as fireworks, thunder and gunshots, even though only a quarter had reported their dog as ‘fearful’ of noises.

This suggests that whilst they are aware of their pet’s behavioural response when exposed to a loud noise, owners do not necessarily recognise this as being indicative of fear or anxiety. This has relevance both for awareness of compromised welfare, and the methodology for surveying such behaviour.

The most commonly reported behavioural signs were vocalising, trembling/shaking, hiding, vocalising and seeking people.  It is thought trembling and shaking are more often reported by owners than other behaviours because they are similar to fearful behaviours in humans.

Other behavioural signs, such as decreased activity or salivation, may not be as easily recognised by owners as signs of fear, and may be under-reported. Also, signs of urination, salivation and destruction may make owners disappointed or angry, and this may influence their interpretation that such behaviours are associated with fearfulness.

Responses to fireworks were the most common, but fear responses to loud noises such as fireworks, gunshots and thunder appear to commonly co-occur, suggesting generalisation between salient stimuli.

The risk factors for owner-reported fear of noises included breed, although 12 breeds or breed types were less likely to show fear responses to noises than cross-breeds, including popular gundog breeds such as the Labrador, Cocker Spaniel and Springer Spaniel; age, where risk increased with age; and origin, where dogs living with the owner who bred them had a reduced risk compared to dogs purchased from the breeder by a second owner, supporting the view that an early environment that is very similar to the environment experienced in adulthood  is advantageous.

The researchers suggest a dog’s early life experience is an important factor in the development of fear responses to specific loud noises.

Dr Rachel Casey, European Specialist in Veterinary Behavioural Medicine and Senior Lecturer in Companion Animal Behaviour and Welfare at Bristol University, said: “Our results suggest that the characteristics of dogs, their early environment, and exposure to specific loud noises are involved in the development of fear responses to noises.  Interestingly, less than a third of owners sought professional advice about treatment for their pet’s response to noises.”

Disappointingly, less than a third of owners currently seek professional advice about treatment for their pet’s fear.  The researchers recommend there is a need for veterinary surgeons to increase awareness among the general dog owning public that treatment is both available and effective in dealing with fears of loud noises, and to direct them towards appropriate sources of help.

Information for vets and dog owners on finding an expert to help treat behaviour problems including fear of noises can be found at www.rspca.org.uk/findabehaviourist

The authors are grateful to the RSPCA, Blue Cross, Dogs Trust and Kennel Club for financial contribution towards the postal questionnaire, and the RSPCA for providing financial assistance in conducting the structured interviews.