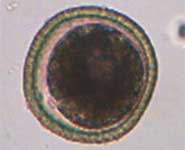 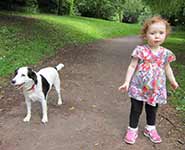 New research has shown that dogs act as a major source of the parasite egg, Toxocara, which can potentially contaminate the public environment and infect humans.

The aim of the study, led by Dr Eric Morgan and colleagues from the University of Bristol’s School of Veterinary Sciences and published in the international scientific journal, Veterinary Parasitology, was to identify where efforts to control the parasite should focus, in the interests of protecting public health.

The parasitic worm, called Toxocara, is a rare cause of disease in humans, responsible for occasional cases of abdominal pain, loss of sight, and potentially asthma and epilepsy. The link with dogs, host to the adult parasites, has long been accepted, but this study has shown that in spite of decades of efforts through worming and control of dog fouling, the parasite remains common in our pets and on our streets.

For the first time, relative contributions of dogs and the other hosts of the parasites, cats and foxes, are estimated, as well as total egg output, using data from Bristol. With the help of additional information from a previous study led by Vet School colleague, Dr Jane Murray, the researchers estimate that nearly four tonnes of dog waste are produced in Bristol each day and nearly 1,000 tonnes nationally.

Given that each adult female worm can lay 12,500 eggs or more per day, this equates to around 3.7 billion eggs shed per day within the city of Bristol, or a number close to the world’s human population every two days.

Dr Eric Morgan, Senior Lecturer in Veterinary Parasitology and senior author of the paper, said: “These results are not all that surprising but they are likely to differ widely between places. We provided a method for estimating different sources of contamination with Toxocara eggs anywhere in the world.  This will hopefully help locally appropriate control measures to be put in place. The data also provides a baseline against which future changes can be measured, as we currently lack any good evidence of how effective steps such as anti-fouling legislation are in reducing egg load and human disease.”

Regular worming, especially of younger dogs and continued efforts to promote removal of faeces from public areas by dog owners are key to reducing the reservoir of infection for humans.  For the public, the message is clear: bag it, bin it, and worm your dog.