How does fibrosis occur in Crohn’s disease? 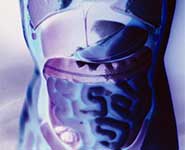 New research, led by the School of Veterinary Sciences at the University of Bristol, has shown that a protein, known as IL-13, could be the key to the development of fibrosis in Crohn’s disease.

Crohn’s disease is a chronic, debilitating condition characterised by inflammation and ulceration occurring at any point in the gastrointestinal tract. Currently there is no cure. One of the major complications of Crohn’s disease is the development of fibrosis – hardening and thickening – in the bowel wall. This causes the intestine to lose its mobility and it eventually becomes so narrow that food and faeces are unable to pass.

Fibrosis occurs when there is an overproduction of the proteins which are normally involved in the tissue healing process, including collagens.

The research team, led by the School of Veterinary Sciences at the University of Bristol, found an increase in collagen synthesis and a lack of control of collagen deposition in fibrotic intestine taken from Crohn’s disease patients when compared to normal intestine. The researchers believe that this is related to an increase in a soluble mediator, interleukin 13 (IL-13), previously identified as promoting fibrosis in the lung, liver and kidney.

Dr Jenny Bailey, a researcher in the School of Veterinary Sciences at the University of Bristol, said: “We have identified a novel population of IL-13-producing cells which, in intestinal samples, were found at very high levels in fibrotic muscle.  We believe these cells are key to the development of fibrosis.

“Understanding how fibrosis occurs will help us to develop new medicines to treat patients.”

Although there is some success in treating the inflammation in Crohn’s disease, there are no current effective drugs to treat fibrosis.  In cases of severe fibrosis, the only remedy is surgical excision of the strictured gut and around 30 per cent of Crohn’s disease sufferers will undergo surgery at least once. Unfortunately, removal of the fibrotic tissue does not prevent fibrosis recurring in another part of the intestine and Crohn’s patients frequently have to endure repeated surgery, eventually resulting in a short bowel which is no longer able to sustain adequate function.