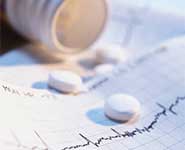 Alzheimer’s Society and the British Heart Foundation (BHF) have announced the beginning of a major new £2.25 million clinical trial to test whether a widely prescribed blood pressure drug could double up as a first treatment for a common form of dementia.

The widely prescribed drug amlodipine has shown promising effects in people with vascular dementia, the most common type of dementia after Alzheimer’s disease. Alzheimer’s Society and the British Heart Foundation (BHF) have announced the beginning of a major new £2.25 million clinical trial to test the drug’s effectiveness in people with the condition.

Experts based at the School of Medicine, Dentistry and Biomedical Sciences at Queen’s University Belfast will recruit nearly 600 people with vascular dementia for a groundbreaking two year trial into the drug’s potential as a dementia treatment.

The researchers, led by Professor Peter Passmore and involving co-investigators, Professor Pat Kehoe and Dr Liz Coulthard from the University of Bristol’s School of Clinical Sciences, hope to show that 10 mg a day of the drug can significantly improve memory and cognitive health. As amlodipine is already licensed and known to be safe, the treatment – which costs the NHS just £1.07 a month – could be in use as a treatment within five to ten years.

Vascular dementia is caused by problems with the blood supply to the brain and affects about 150,000 people in the UK. Those with heart conditions, high cholesterol and diabetes are especially at risk, and it can be triggered by a stroke. There are currently no available treatments for vascular dementia yet there are fewer ongoing clinical trials for the condition than there are for hay fever.

Amlodipine is used to treat high blood pressure, a major risk factor for vascular dementia. It is known to enter the brain and researchers think it might work by protecting brain cells from damage when blood supply to the brain is poor.

Professor Peter Passmore, at Queen’s University Belfast School of Medicine, Dentistry and Biomedical Sciences, said: “Vascular dementia is a very common disease and to date no major trial has been successful in developing an effective treatment for this disease. We hope, using evidence from previous research, and by trialling the drug amlodipine we may get a step closer to improving the outcomes of patients with vascular dementia in the next decade.”

Pat Kehoe, Professor of Translational Dementia Research in the School of Clinical Sciences at the University of Bristol, added: “It is fantastic that Bristol, with its rapidly expanding BRACE-supported Clinical Dementia Research Programme led by Dr Coulthard, will be part of this large trial that shows that the UK is leading the fight against vascular dementia, the second most common form of dementia.”

Jeremy Hughes, Chief Executive at Alzheimer’s Society, said: “It’s scandalous that despite affecting 150,000 people there are no effective treatments for vascular dementia and very few new treatments under investigation. This groundbreaking trial could be the best hope we have to get an effective treatment in use in the next decade.

“Developing new drugs from scratch can costs hundreds of millions and take up to twenty years but our flagship Drug Discovery programme aims to test existing drugs in people with dementia, fast-tracking the process and bringing new treatments to market faster and more cheaply.”

Professor Peter Weissberg, Medical Director at the BHF, added: “The 2.3 million people living with coronary heart disease in the UK are at increased risk of developing vascular dementia. Unfortunately, as yet, there are no effective treatments for this devastating condition.

“Amlodipine is a widely prescribed, blood pressure lowering treatment that has shown some promising effects in vascular dementia. The BHF and Alzheimer’s Society have joined forces to fund this definitive study. If positive, it would pave the way for an affordable treatment for vascular dementia in the near future.”

* One in three people over 65 will develop dementia

* Alzheimer’s Society research shows that 800,000 people in the UK have a form of dementia, more than half have Alzheimer’s disease. In less than ten years a million people will be living with dementia. This will soar to 1.7 million people by 2051

* Alzheimer’s Society has a plan to deal with dementia. Help us support people to live well today and fight for a world without dementia tomorrow. We rely on voluntary donations to continue our vital work. You can donate now by calling 0845 306 0898

About the British Heart Foundation

Coronary heart disease is the UK’s single biggest killer. For over 50 years we’ve pioneered research that’s transformed the lives of people living with heart and circulatory conditions. Our work has been central to the discoveries of vital treatments that are changing the fight against heart disease. But so many people still need our help. From babies born with life-threatening heart problems to the many Mums, Dads and Grandparents who survive a heart attack and endure the daily battles of heart failure. Every pound raised, minute of your time and donation to our shops will help make a difference to people’s lives.