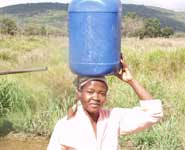 New research suggests that official reports overestimate progress towards the United Nations Millennium Development Goal (MDG) target for access to safe drinking water. The researchers show that the current methods oversimplify the measure by not accounting for water quality; the key measure of safety. In four of the five developing countries studied, the reduction in reported progress would be substantial. It is likely that MDG safe-water progress in other developing countries is similarly overstated.

The study was led by the University of Bristol’s Water and Health Research Centre in the Department of Civil Engineering and involved collaboration with researchers at the Universities of Southampton, Surrey and North Carolina. The aim was to determine how data on water source quality affect assessment of progress towards the MDG target on access to safe drinking water.

The World Health Organization (WHO) and United Nations Children’s Fund (UNICEF) are responsible for monitoring progress towards the MDG target through their Joint Monitoring Programme (JMP). The current monitoring approach uses a classification of water source type – improved or unimproved – as the indicator of water safety. In effect, all improved sources such as piped supplies, protected wells and boreholes are considered to be safe. This pragmatic approach was developed in the absence of water quality monitoring data suitable for such a global monitoring programme.

In 2004-5, WHO and UNICEF undertook a series of surveys in five countries to improve understanding of the quality of water from different source types.  The surveys, called the Rapid Assessment of Drinking Water Quality (RADWQ), found that many of the ‘improved’ source types considered as safe often tested positive for contaminants, both microbial and chemical.

Stephen Gundry, Professor of Environmental Engineering, who led the study, said: “The MDG indicator, access to an improved water source, can lead to substantial overestimates of the population with access to safe drinking water and, consequently, also overestimates the progress made towards the 2015 MDG target.

“As water quality data internationally were limited and unreliable, the Joint Monitoring Programme of WHO/UNICEF chose to base its estimates on access to an improved source. The RADWQ study showed that many such improved sources are in fact unsafe and thus this assumption causes an overstatement in progress towards the MDG target.”

Taking account of data on water source quality resulted in substantially lower estimates of the percentage of the population with access to safe drinking water in 2008 in four of the five study countries: the absolute reduction was 11 per cent in Ethiopia, 16 per cent in Nicaragua, 15 per cent in Nigeria and seven per cent in Tajikistan. The adjustment increased the most recent estimate of the number of people without access to safe drinking water in Ethiopia and Nigeria, the two most populous countries, by 8.9 and 22 million, respectively. There was only a slight reduction in Jordan. Microbial contamination was more common than chemical contamination and was the principal cause of the reductions.

Although we have not directly extrapolated our results to a global scale, the study suggests that the method used by the Joint Monitoring Programme to monitor progress towards MDG Target 7c, is likely to lead to substantial overestimation of the number of safe sources compared with criteria that include water quality. The Joint Monitoring Programme recently addressed this issue in their report ‘Drinking Water: Equity, safety and sustainability’ which draws similar conclusions about the impact of water quality on reported estimates.

The researchers recommend that data on water quality currently available from national monitoring programmes could be used to adjust MDG progress for those countries not included in the RADWQ project. They also recommend future international targets should consider including the testing of water quality to assess the safety of supplies.

Professor Stephen Gundry was interviewed on BBC World Service's More or less about the study on the Millennium Development Goal target for access to safe drinking water.  The programme is available to listen to again on BBCiPlayer.

The research was funded by the Bill & Melinda Gates Foundation as part of the Aquatest research programme.

The eight Millennium Development Goals (MDGs) – which range from halving extreme poverty to halting the spread of HIV/AIDS and providing universal primary education, all by the target date of 2015 – form a blueprint agreed to by all the world’s countries and all the world’s leading development institutions. They have galvanized unprecedented efforts to meet the needs of the world’s poorest.

From the Millenium Development Goals website , Target 7.C is to:

Halve, by 2015, the proportion of the population without sustainable access to safe drinking water and basic sanitation.

· The world is on track to meet the drinking water target, though much remains to be done in some regions.
· Accelerated and targeted efforts are needed to bring drinking water to all rural households.
· Safe water supply remains a challenge in many parts of the world.
· With half the population of developing regions without sanitation, the 2015 target appears to be out of reach.
· Disparities in urban and rural sanitation coverage remain daunting.
· Improvements in sanitation are bypassing the poor.

Reports by the Joint Monitoring Programme (Progress on Sanitation and Drinking-water: 2010 Update and Drinking Water: Equity, safety and sustainability) are available from www.wssinfo.org.