Can science predict a hit song? 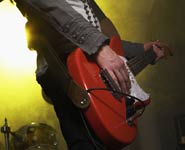 New research has looked at whether a song can be predicted to be a ‘hit’.

The paper, to be presented at an international workshop this week, argues that predicting the popularity of a song may well be feasible by using state-of-the-art machine learning algorithms. The research team, led by Dr Tijl de Bie, is based in the University of Bristol’s Intelligent Systems Laboratory in the Faculty of Engineering.

The team looked at the official UK top 40 singles chart over the past 50 years. Their aim was to distinguish the most popular (peak position top five) songs from less popular singles (peak position 30 to 40). A website, ScoreAHit, about the research is available at scoreahit.com/

The researchers used musical features such as, tempo, time signature, song duration and loudness. They also computed more detailed summaries of the songs such as harmonic simplicity, how simple the chord sequence is, and non-harmonicity, how ‘noisy’ the song is.

A ‘hit potential equation’ that scores a song according to its audio features was devised. The equation works by looking at all the UK hits for a certain time and measuring their audio features. From this the researchers had a list of weights, telling then how important each of the 23 features was and allowing them to compute a score for a song.

The team found they could classify a song into a ‘hit’ or ‘not hit’ based on its score, with an accuracy rate of 60 per cent as to whether a song will make it to top five, or if it will never reach above position 30 on the UK top 40 singles chart.

Dr Tijl De Bie, Senior Lecturer in Artificial Intelligence, said: “Musical tastes evolve, which means our ‘hit potential equation’ needs to evolve as well. Indeed, we have found the hit potential of a song depends on the era. This may be due to the varying dominant music style, culture and environment.”

The study found some interesting trends, such as:

The results of the study differ from previous research, which has so far not been shown to predict hit potential. A possibly important qualitative difference with previous studies is the use of the time-shifting perceptron to account for evolving musical taste.

The MML 2011 4th International Workshop on Machine Learning and Music: Learning from Musical Structure held in conjunction with the 25th Annual Conference on Neural Information Processing Systems will be held in Sierra Nevada, Spain on Saturday December 17.

PhD student, Matt McVicar, will be presenting the abstract at the international workshop.

To find out if it is possible to predict hits in the UK singles chart, go to scoreahit.com/