Research into energy flow features on the cover of Nature Chemistry 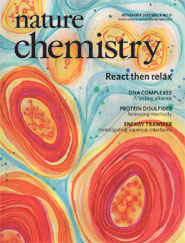 The cover image shows an artistic impression of the flow of energy in the wake of the solution-phase bimolecular reaction between cyclohexane and the cyano radical. The more intense colours indicate fast energy exchange within the radical co-product solvent shell, whereas less intense colours indicate slower energy flow once the products have diffused away from one another within the solvent. Becca Rose and David Glowacki

‘Energy flow maps’ which provide new insight into how chemical reactions work are described in a paper by Dr David Glowacki and colleagues at the University of Bristol in the November issue of Nature Chemistry.

Molecules are made out of atoms that are attached to one another by chemical bonds (which can be compared to little elastic bands that hold the atoms together).  In chemical reactions, molecules undergo processes that break old bonds and make new ones, resulting in different products.  The skill of the chemist lies in knowing which molecules to mix, under what conditions, to form the desired product.

Most of the time, molecules are not reacting: the elastic bands holding the atoms together remain intact, and the atoms undergo small jiggles and weak vibrations that arise from the small amount of heat energy that atoms have at any given temperature.  This state of weak vibrations is called thermal equilibrium.

Chemical reactions happen far from equilibrium, however.  They require large amounts of energy to be located in the atoms whose bonds are going to break, giving way to strong vibrations that cause the elastic bands to stretch and ultimately snap.  In the moments immediately after a reaction has occurred and a new bond is formed, there is a complementary situation, and the atoms in that particular new bond vibrate very strongly.

Most chemical reactions take place with reactant molecules embedded in a sea of unreactive liquid (or solvent) molecules.  Common solvents, including water and a number of organic liquids, play an important role in both shuffling energy to reacting molecules, and subsequently shuffling it away after reaction has occurred.  However, when chemists think about reactions in liquids, they tend to overlook the underlying energy shuffle that transports energy to and from the chemical reaction.  Instead, they focus on the equilibrium states that occur well before, and well after, a reaction occurs.

The study by Dr David Glowacki and colleagues in Bristol’s School of Chemistry provides fundamental microscopic insight into ultrafast laser experiments that track the energy levels of products formed one millionth of a millionth of a second after a chemical reaction.

Using state-of-the-art computational models run on Bristol’s BlueCrystal supercomputer, Dr Glowacki and colleagues were able to resolve the energy shuffle associated with individual bond making and breaking in liquids.  The unprecedented level of detail afforded by their study allowed them to construct a ‘map’ of how energy flows in the immediate wake of a chemical reaction.

Their ‘energy flow map’ reveals clear shortcomings in the physical models commonly used to describe the energy shuffle occurring alongside chemical reactions.  The new insight afforded by such ‘energy flow maps’ has the scope to help chemists working in areas as diverse as biochemistry, pharmaceutical chemistry, polymer chemistry, and nanoscience.

This paper is featured on the cover of the November issue of Nature Chemistry (image by Becca Rose and Dr David Glowacki). It follows on from recent work featured on the cover of Science, and involves a collaboration between theoretical chemists Dr David Glowacki and Professor Jeremy Harvey, and experimental physical chemists led by Professor Andrew Orr-Ewing.