Could a probiotic be used to treat inflammatory bowel disease? 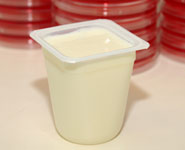 A new study by academics at the University of Bristol has found a scientific ‘design’ for a probiotic that could be used to treat inflammatory bowel disease (IBD), such as Crohn’s disease.

The research by academics at the University of Bristol’s School of Veterinary Sciences and School of Clinical Medicine is published online in the journal PLoS ONE.

Most probiotics on the market, such as Lactobacillus and Bifidobacterium, are lactic acid bacteria.  Although probiotics have been shown to successfully maintain remission in IBD, evidence of their effectiveness in active disease is rare.  The researchers have found that this is because an increase in iron levels, which happens during active IBD, inhibits the growth of probiotic bacteria, including Lactobacillus.

Iron levels increase in the intestine during inflammation, bleeding, during stress and when people are taking iron supplements.  Iron is critically important to the growth of most species of bacteria, including pathogens, and its availability is what restricts their growth.  It is well known that pathogens increase growth rate by up to 8,000 times when exposed to increased levels of iron.  Lactic acid bacteria are unusual as they have evolved not to require iron, and so do not increase growth rate when exposed to it.

Dr Tristan Cogan, Research Fellow in the School of Veterinary Sciences, said: “When we started our study we considered the properties that a probiotic would need to treat IBD.  Most importantly, it would need to be able to survive and grow in the presence of high levels of iron and to reduce inflammation. We then worked out how to test bacteria to see whether it had these properties.

“The difficult step was finding a bacterium that had all of the properties that we wanted.  Now we have found something that looks like it should work, our next step will be to test the probiotic in clinical trials.”

The researchers found that a range of probiotic strains of lactic acid bacteria cannot respond to increased iron levels.  The study then identified a strain, which the academics have patented, that can and showed that it has probiotic and immunomodulatory properties, and can reduce pro-inflammatory responses to pathogens associated with IBD.

The researchers suggest that iron response is the factor that prevents probiotics from being useful in treating disease, and that their bacterium could be a novel probiotic treatment for active intestinal disease.

Chris Probert is currently Professor of Gastroenterology at the University of Liverpool.

Inflammatory bowel disease (IBD) is a group of inflammatory conditions of the colon and small intestine. The major types of IBD are Crohn’s disease and ulcerative colitis.