Some like it hot – European fish stocks changing with warming seas 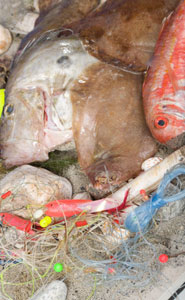 The first "big picture" study of the effects of rapidly rising temperatures in the northeast Atlantic Ocean shows that a major shift in fish stocks is already well underway. But it isn't all bad news. The research, published today [15 Sep] in Current Biology, shows that some fishes' losses are other fishes' gain.

The study led by Dr Steve Simpson of the University of Bristol in collaboration with researchers from eight other institutions, is the first to combine a suite of European datasets, which included more than 100 million fish, to explore how warming is affecting the commercially important European fishery.  The researchers analysed 28 years of fisheries agency data from 11 independent surveys covering more than a million square kilometres of the European continental shelf.

The northeast Atlantic has been described as the “cauldron of climate change”, with warming occurring at a rate four times the global average over the past 30 years. Dr Simpson, a researcher in the University’s School of Biological Sciences, explained: "While a 1.3° Celsius change in mean annual temperature in the North Sea over the past three decades may sound trivial, temperature has a strong influence on egg maturation rates, growth and survival of fish larvae, and impacts on the planktonic communities that underpin the food webs that sustain commercial fisheries.

Indeed, the data show that fish in European waters have undergone profound community-level changes that are related to dramatic warming trends for the region. The vast majority – a whopping 72 percent – of common fish species have already shown a change in abundance that relates to the rising sea temperatures.

The results show that studies focused only on changes to where particular fish species are found – species ranges – will miss the far more ecologically and economically relevant effects of warming. They also suggest there will be an unavoidable change in what's for dinner.

Simpson added: "We may see a further decline in cold-adapted species, many of which were the staple for our grandparents. The flip side is a likely increase in species that for the UK may seem relatively exotic now, such as red mullet and John Dory. Over time, with effective management and an appropriate response in consumer demand, European seas have the potential to yield productive and sustainable fisheries into the future."

‘Continental Shelf-Wide Response of a Fish Assemblage to Rapid Warming of the Sea’ by Steve Simpson, Simon Jennings, Mark Johnson, Julia Blanchard, Pieter-Jan Schön, David Sims and Martin Genner, is published in Current Biology, a Cell Press publication, and is available from the authors on request. doi:10.1016/j.cub.2011.08.016

This work was funded by the Natural Environment Research Council (NERC) and the Department for Environment Food and Rural Affairs (Defra).