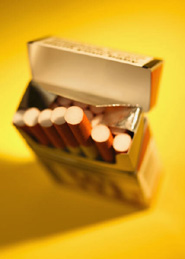 Plain cigarette packaging could help prevent people taking up the habit but would have little effect on those who already smoke on a daily basis, according to new research from the UK Centre for Tobacco Studies (UKCTCS), which has bases at the Universities of Bristol and Bath.

The researchers monitored the eye movements of non-smokers, light smokers and daily smokers who were asked to look at non-branded cigarette packets that showed only the health warning as compared to branded packets with identical health warnings.

The results showed that the eyes of non-smokers and light smokers were drawn to the health warnings on plain packets more than on branded packets, suggesting that plain packaging enhances attention to health warnings.  Existing smokers did not seem to be affected by packaging modifications.

Professor Marcus Munafò from the University of Bristol, who led the research said: “In this study we assessed the impact of plain packaging on visual attention towards health warning information and brand information on branded and plain cigarette packs, using eye tracking technology.

“This technology provides a direct measure of eye gaze location and therefore the focus of visual attention.  It is plausible that the more someone looks at the health warnings, for example, the more likely those health warnings are going to be read and understood, with a subsequent impact on behaviour.”

Tobacco marketing has been banned in many countries as it encourages the uptake of smoking and makes it harder for smokers to quit.  In response, the tobacco industry has focused on unregulated marketing channels, including packaging, as a way of promoting its products.

The introduction of plain packaging has been proposed to address the issue of tobacco promotion, meaning every packet would be the same shape and colour, with all branding removed apart from a standard typeface, colour and size with all relevant legal markings, including health warnings.

Professor Linda Bauld, one of the authors of the article, said: “The UK government has committed to consulting on introducing plain packaging in the future and this study makes a useful contribution to existing evidence. Plain packaging will make health warnings appear more prominent and strengthen their impact.  This will reduce the role of the pack as a tobacco promotion tool and prevent the use of labels or elements of the pack potentially being used to deceive smokers about the dangers of cigarette smoking.”

The move to remove branding from cigarette packets is already being introduced in Australia from next year.  The tobacco industry has argued that there is no evidence to support the move and is campaigning against it.  The UKCTCS study provides important support for the Australian government’s introduction of plain packaging as well as demonstrating exactly why the tobacco industry is fighting these plans so desperately.

The article will be published online by the scientific journal Addiction on 11 April 2011.

'Plain Packaging Increases Visual Attention to Health Warnings on Cigarette Packs in Non-Smokers and Weekly Smokers but not Daily Smokers' by Munafò M.R., Roberts N., Bauld L. and Leonards U. in  Addiction.