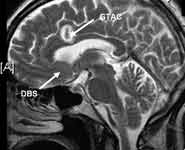 Sagittal MRI scan of the brain showing the position of one of the deep brain stimulation (DBS) leads and one of the guide tubes for anterior cingulotomy (GTAC). Scan taken during surgery. [A]= front of brain

Pioneering neurosurgical treatment, a world first in Bristol, led by academics at the University of Bristol and North Bristol NHS Trust that very accurately targets brain networks involved in depression, could help people who suffer with severe and intractable depression.

The research led by Dr Andrea Malizia, Consultant Senior Lecturer in the School of Social and Community Medicine at the University of Bristol and Mr Nikunj Patel, Senior Clinical Lecturer in the Department of Neurosurgery at North Bristol NHS Trust, are pioneering a number of treatments including experimental antidepressants, deep brain stimulation (DBS) and stereotactic neurosurgery.

The patient, whose illness had stopped responding to conventional treatments, was offered DBS in the first trial in the world that stimulates two different brain networks that are involved in depression. DBS in this case provided some temporary response but was not sufficient to make her well. She is now well following further advanced stereotactic neurosurgery carried out in early 2010.

The personal history of the patient, whose life has been changed by the pioneering treatment, will be broadcast on BBC One’s Inside Out West tonight [Monday 24 January].

Deep brain stimulation consists of inserting thin wires in the brain that are connected to a ‘pacemaker’. The effects are to inhibit and stimulate brain circuits that re specific to the condition being treated. The current DBS trial targets different circuits involved in depression. These monitor the regulation of emotion, oversee the integration of emotion with bodily and intellectual function and regulate internal drives.

Some patients do not respond to DBS or are not suitable for it, in which case the option of an ‘Anterior Cingulotomy’ using implantable guide tubes (GTAC) has been specifically developed in Frenchay and this patient was the first to have it. This operation also modifies circuits that are important in emotion and the academics believe to be overactive in a number of psychiatric disorders. The neurosurgical developments pioneered at Frenchay make the surgery much more accurate and hopefully this will have an impact on increasing efficacy and decreasing side effects.

Dr Malizia said: “Our patients and their families suffer enormously and it is often thought that nothing else can be done. This lady responded temporarily to two of the complex treatments that we initiated in Bristol, but in the end remission has only been achieved by persisting and moving on to the next advanced treatment.

“We are very grateful to our patients and their relatives who, in spite of depression destroying their lives, bravely carry on fighting the illness year after year, and also to the Friends of Frenchay Hospital who have donated DBS equipment - their support has been essential in starting this important endeavour.”

Depression is an illness that affects about 20 per cent of people at least once in their lifetime. About half the people get well within six months but about ten per cent of sufferers are still unwell after three years. From then on the proportion of people who get well is much reduced with only about one in ten getting better every year.

There are a number of conventional treatments for depression including specific psychotherapies, different antidepressant medicines and electroconvulsive therapy (ECT). Long-term experience has shown that each time a medical treatment does not work, there is a decrease in the probability of the next treatment working of about a third. This means that although 60 per cent of patients respond to the first antidepressant, only about 10 per cent will respond to the fifth.  ECT remains the most efficacious short-term treatment but it does not work for everyone, its effects can be short lasting and some people have considerable side effects.

People who experience chronic depression can be very severely disabled: many lose their jobs, are on benefits, have to change home or lose their family. Personal distress is high and about 15 per cent die by suicide.

The Psychopharmacology and Functional Neurosurgery Service in Bristol provides complex treatments for these severely disabled people and aims to understand the brain changes underlying this disorder by using advanced brain imaging techniques and sleep recordings.

The first patient to undergo the radical new treatment for depression will be shown on Inside Out West on BBC ONE in the West at 7.30 pm on Monday 24 January 2011.

Grandmother Sheila Cook from Torquay is the first patient to benefit from this new form of treatment following a long, hard battle with depression that lasted for more than a decade and saw her attempt to take her life on more than one occasion.

She is now a happy 62-year-old who is beginning to enjoy life again. Since having the treatment she says her life has changed and she feels happy for the first time in years.

She is planning on moving nearer to London to be closer to her two grandchildren.

Sheila’s problems began ten years ago when she started to feel down and depressed. She stopped eating and felt stressed at work - she was an experienced and senior nurse. Feelings of not being able to cope began to get in the way of everyday life.

She said: “It just crept up on me, I felt awful and didn't know why.”

After visiting her GP, she was referred to her local mental health trust and started a course of medication with support from a social worker.

Things got so bad that she was admitted to hospital for weeks at a time and clinicians started using electric shock therapy (ECT) in an attempt to improve things.

Sheila said: “The ECT helped but it didn’t last and in the end my husband had to give up work and we relocated to Torquay because we thought I would be happier by the sea.”

For a couple of months it seemed the change of scenery did Sheila the power of good and she felt better than she had done for some time, but the symptoms came back and became worse.

More visits to her GP followed and additional ECT was tried but had to be halted when doctors thought it was unsafe for her to have any more.

She said: “Things became really bad. I didn’t want to go out. I’d sit in all day and think bad thoughts.”

It was at this time she was referred by her doctors to the University of Bristol’s Psychopharmacology Unit, which, together with colleagues from the Neurosciences Department at Frenchay Hospital, were beginning to look at different treatments for depression including deep brain stimulation, which had already produced dramatic improvements for patients with motor illnesses such as Parkinson’s disease.

Sheila said: “They asked me if I wanted to take part in a clinical trial.

“I initially had two stimulators fitted into my chest wall that sent currents of electricity to my brain. The initial effects were positive but the improvement was not sustained. Severe symptoms came back including suicidal intent.”

In February 2010, Sheila was asked if she would trial a new form of treatment - ablative neurosurgery using guide tubes and considered it carefully. Although worried about it, she balanced the potential benefits with her profound distress and disability.

Sheila said: “The effects were remarkable. Within a few weeks my life changed. I felt happy for the first time in years and began to take an interest in life again. I read books, did the housework, went for walks and, perhaps most importantly, got to know my family again.”

Sheila has two grandchildren. The first was born during the height of her depression and, tragically, she says she initially took no interest. The second was born seven months ago when she was feeling better.

She added: ”I'm now rediscovering my family and my wonderful grandchildren so much so that we are now planning to move to be nearer to them.

“I cannot thank the clinicians and researchers who worked with me enough - they have given me my life back.”