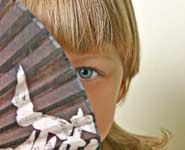 Girls who begin menstruating at an early age are at greater risk of depressive symptoms and during their adolescence, according to new research by academics from the University of Bristol and the University of Cambridge.

Girls who begin menstruating at an early age are at greater risk of depressive symptoms during their adolescence, according to new research by academics from the University of Bristol and the University of Cambridge.

The research published in the January issue of the British Journal of Psychiatry examined the link between timing of a first period and depressive symptoms in a sample of 2,184 girls taking part in a long-term study known as the Avon Longitudinal Study of Parents and Children (ALSPAC).

The researchers used a structural equation model to examine the association between onset of menstruation and depressive symptoms at ages 10.5, 13 and 14 years.

Lead researcher Dr Carol Joinson, Lecturer in the School of Social and Community Medicine at Bristol University, said: “Our study found that girls who mature early are more vulnerable to developing depressive symptoms by the time they reach their mid-teens. This suggests that later maturation may be protective against psychological distress.

“The transition into puberty is a critical developmental period, associated with many biological, cognitive and social changes. These can include increased conflict with parents, the development of romantic relationships, changes in body image and fluctuating hormone levels. These changes may have a more negative impact on girls who mature at an early age than those who mature later. Early maturing girls may feel isolated, and faced with demands which they are not emotionally prepared for.”

Dr Joinson concluded: “If girls who reach puberty early are at greater risk of psychological problems in adolescence, it may be possible to help them with school- and family-based programmes aimed at early intervention and prevention.”

However, it is still unclear from the current results whether an early period is associated with persistent adverse consequences for emotional development beyond the mid-adolescent period. The researchers point out it is possible that girls who mature later may eventually experience similar levels of psychological distress to those who mature earlier, after sufficient time has unfolded.

The research was funded by the Economic and Social Research Council (ESRC).

The Economic and Social Research Council (ESRC) is the UK's largest organisation for funding research on economic and social issues. It supports independent, high quality research which has an impact on business, the public sector and the third sector. The ESRC's planned total expenditure in 2009/10 is £204 million. At any one time the ESRC supports over 4,000 researchers and postgraduate students in academic institutions and independent research institutes.