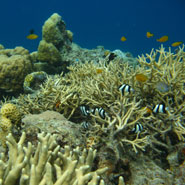 Damselfish on a coral reef 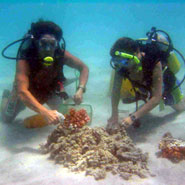 Noisy neighbours can be desirable – at least if you’re a young reef fish trying to choose a home. New research from the Universities of Auckland and Bristol found that juvenile fish listen to the sounds made by local residents – such as other fish, shrimps and lobsters – before heading for the reef that suits them best.

Noisy neighbours can be desirable – at least if you’re a young reef fish trying to choose a home.  New research from the Universities of Auckland and Bristol found that juvenile fish listen to the sounds made by local residents – such as other fish, shrimps and lobsters – before heading for the reef that suits them best.

Working on the Great Barrier Reef, an international team of marine biologists played recordings from different types of habitats next to artificial reefs, and discovered that juvenile fish arrived preferentially at reefs supplemented with noises from their naturally favoured habitat.  This shows that fish can use acoustic cues to distinguish between different communities and employ this information to select a suitable home.

The shallow waters around coral reefs are very loud: the combination of clicks, pops, chirps and scrapes produced by resident fish, snapping shrimp, lobsters and urchins can be detected with the aid of underwater microphones (hydrophones) many kilometres away.  This biological symphony varies depending on which animals make up the local community and, as a result, signature sounds give a strong indication of the type of habitat.

For each night of a new moon phase during the Australian summer, the team working at Lizard Island Research Station moored underwater sound systems next to artificial reefs they had built on sand flats, then early the following morning, scuba divers collected the juvenile fish which had arrived over night.  The researchers played recordings from two types of habitat (fringing reef and lagoon), and compared fish numbers with those from reefs without playback.

Previous research by co-author Dr Steve Simpson of the University of Bristol's School of Biological Sciences, UK, has shown that fish larvae are attracted from open water to settlement sites by general reef noise.  Dr Simpson said: “This is the first demonstration that juvenile fish, who move around at night looking for specific locations for their adult life, can tell different habitats apart using noise, and pick the one that best suits their requirements.  It is much like wandering around a music festival, eavesdropping on different music stages, before choosing where to pitch your tent.”

The study, published in Coral Reefs, provides clear evidence that young fish from a whole suite of reef fish families use acoustic cues during nocturnal relocation.  “Until recently it was debatable whether fish could detect the direction that sound travelled underwater, let alone tell different sounds apart to explore their surroundings,” said co-author Dr Andrew Jeffs of the University of Auckland.  “Our study demonstrates that both acoustic quality and direction influence key decision-making processes in young fish.”

However, Dr Simpson warned: “Human noise, from shipping, drilling and pile-driving, is now a substantial component of the acoustic soundscape of the oceans.  We are only just beginning to understand how important natural noises are in providing fish with a roadmap for their orientation behaviour.  The fear is that in heavily developed areas these vital cues are now being masked by human activity, compromising the ability of fish to behave appropriately and threatening vital fisheries and tourism resources.”