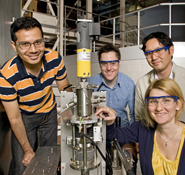 An international team of scientists has come up with a new way to treat carbon dioxide (CO2) so that it can be used in efficient and environmentally friendly methods for extracting oil.

An international team of scientists has come up with a new way to treat carbon dioxide (CO2) so that it can be used in efficient and environmentally friendly methods for extracting oil.

The team has developed a soap-like additive for CO2 that turns it into a viable solvent for commercial-scale enhanced oil recovery to increase the amount of crude oil that can be extracted from oil fields. The CO2 soluble additives can also be used to reduce the environmental damage caused by every day industrial processes such as food processing and the manufacture of electronics.

Liquid CO2 is increasingly being used industrially to replace common petrochemical solvents because it requires less processing and it can be easily recycled. The difficulty has been that in order to operate effectively as a solvent, carbon dioxide needs additives, many of which are damaging to the environment.

CO2 offers an efficient, cheap, non-toxic, non-flammable and environmentally responsible alternative to conventional petrochemical solvents. Even water as a solvent for example, comes with its own set of problems; after being used to flush out oil from rocks it then requires cleaning before it can be used again, whereas liquid CO2 can be re-used immediately.

This new development, led by scientists from the University of Bristol together with the University of Pittsburgh and ISIS Neutron Source, a world-leading centre for research in physical and life sciences operated by the Science and Technology Facilities Council (STFC), provides a solution.

Julian Eastoe, Professor of Chemistry from the University of Bristol, said: “Carbon dioxide is useful in enhanced oil recovery as it is able to flow through the pores in the rock much more easily than water.

“The additive, a surfactant, will help thicken the carbon dioxide, which is vital for this process, allowing it to flow through the rock more efficiently. There is also a useful side effect of our ability to use CO2 in this way, as in the future the process will take carbon dioxide generated by industrial activity from the atmosphere and lock it deep underground. Getting longer life out of existing oil reserves will also give more time for research into replacements into non-carbon energy sources such as solar or hydrogen.”

David Willetts, Minister for Science and Universities, said: “This shows what science can do for the environment. It’s why the Government has protected the science budget. In particular it shows how financing core science facilities can lead to many different projects with valuable applications.”

The new additive, surfactant TC14 enables small pockets to form in the liquid CO2 called reverse micelles causing the liquid to thicken. Neutron scattering at ISIS allowed the structure of the reverse micelles to be studied in the CO2 as they formed under high pressure. The neutron instruments giving this molecular level viewpoint are often described as ‘super-microscopes’.

Professor Bob Enick from the University of Pittsburgh said: “The quest to find a chemical capable of modifying the properties of CO2 to make it suitable for widespread use as a solvent in enhanced oil recovery has been long. Previous advances have involved surfactants containing fluorine, which although highly soluble in CO2, are very environmentally damaging. The new additive, surfactant TC14, contains no fluorine at all and is a harmless hydrocarbon.”

Dr Sarah Rogers, STFC ISIS scientist, said: “Beams of neutrons are able to penetrate deep inside samples giving unique information about the location and arrangement of the micelles at a molecular level.”

Professor Eastoe added: “By altering the pressure in a specially constructed experimental cell, dissolved material can easily be separated and removed leaving the carbon dioxide for the next use. It would be difficult to look at this system using any other technique, as the CO2 needs to be kept under high pressure. Only under the scrutiny of neutron beams can you fully reveal its actions and properties.

“Experiments on Sans2d, one of seven new neutron instruments built at the ISIS second target station, are particularly fast and accurate in comparison to some older neutron scattering instruments. This development of neutron instrument technology is part of what makes ISIS a world-leading science facility.”

The project, to explore using high pressure CO2 to extract residual oil retained in the pores of rock, was funded by the UK Engineering and Physical Sciences Research Council (EPSRC) and the US Department of Energy. The research, published in the journal Langmuir, is the first to come from Sans2d, one of seven new neutron instruments built at the ISIS second target station, a £145 million expansion to the facility completed last year. It is also one of the first to be published using data collected at the new target station.

The research was also made possible owing to a unique University of Bristol-Industry collaboration with Kruss GmbH, a German manufacturer of instrumentation for surface science analysis.

The company and the University have established the Kruss Surface Science Centre in the School of Chemistry, which provides access to state-of-the art equipment, as well as training and support for its use to University researchers. The equipment was key to finding the right chemicals and conditions.