Flower worth more than its weight in gold 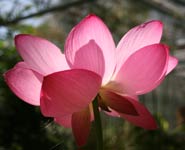 Europe’s first dedicated Chinese Herb Garden at the University of Bristol's Botanic Garden will be officially opened this Saturday, 3 July at 12 noon. There will be 200 species of Chinese herbs within the garden including a mature female ginkgo tree.

The sacred lotus's water-repellent leaf surface has inspired the term ‘lotus effect’.  This term describes the leaves' self-cleaning capacity, which is a result of dirt particles being picked up by water droplets due to a complex nanostructure of the leaf surface.

The Chinese Herb Garden has been made possible due to a special collaboration between the University of Bristol’s Botanic Garden and the Register of Chinese Herbal Medicine, which regulates Chinese practitioners in the UK.

The herb garden, based in the University’s Botanic Garden, will have the most diverse collection of sacred lotus plants (Nelumbo nucifera) in the UK.  Each plant is a pedigree that has been certified by The Centre for Chinese Lotus Research in Wuhan, China, the foremost lotus-breeding centre in the world.

The sacred lotus is a freshwater plant that plays a major part in Chinese medicine and diet. The whole plant – from the flowers to the roots – is edible.  The rhizomes (stems) are roasted, pickled, candied or sliced and fried as chips.  A paste made from the nutlets is used as a filling in ‘mooncakes’, traditional Chinese pastries.  Five separate Chinese herbs are made from the flower structure alone.

There are a number of medicinal uses for the sacred lotus in Chinese medicine from clearing fever to treating insomnia and calming a restless foetus. The raw juice can be applied to cuts to stop bleeding. The essential oil has a calming property and at £200 for 5 ml it is highly prized.

Research will be undertaken at the garden along with the conservation of plants that are under threat in the wild in China. It will also be visited by students of Chinese medicine.

There will be 200 species of Chinese herbs within the garden including a mature female ginkgo tree. A number of other plants, including Anemarrhena aspheloides and A.aspera, (zhi mu) and Achyranthes bidentata (nui xi), are unique in the UK.  The collection has been made possible thanks to help from Nanjing Botanic Garden, China’s oldest national botanical garden.

Achyranthes bidentata and A.aspera, from Nanjing Botanic Garden, are known as ‘nui xi’, which translates as ‘ox knee’ and are used to treat back pain.  The herbs are not grown in the UK because there is no equivalent species in western medicine.

Anemarrhena aspheloides, used to cool the body, is a plant that is never seen outside a Chinese garden. The plant has a small but perfect flower, which is only revealed at night when moths are present.

The design for the garden is based on the classic Chinese pleasure gardens in Suzhou city, which contrasts with the herb gardens found in China, which are usually little more than clearings in forests.

Nick Wray, Curator at the University’s Botanic Garden, said: “After ten years in the making, we are extremely excited to be able to present the world of Chinese herbal medicine to a wide range of people from students to garden enthusiasts.

“With 80 per cent of the world’s population dependant on plants for their healthcare, the aim of the garden is to be as healing in design as it is in content.”

Tony Harrison, Founder of the Chinese Herb Garden, added: “ The collection is vital for research, which requires the living plant.  We will also be introducing students of herbal medicine to plants they have previously only seen as dried specimens.”

The Chinese Herb Garden at the University of Bristol’s Botanic Garden, The Holmes, Stoke Park Road, Bristol, was officially opened on Saturday 3 July at 12 noon.  This was followed by a Tai Chi demonstration and a traditional lion dance to bring good fortune to the garden in the years ahead.

Founder of the Chinese Herb Garden, Tony Harrison
Tony Harrison, a Chinese medicine practitioner from Cotham, started growing Chinese plants in his own garden in 1992 with a single plant of Polygonum multiflorum (He Shou Wu). The garden was expanded in 1998, thanks to a Winston Churchill Scholarship to fund research trips to China. The collection of plants started to become unique and too large for its site and in 2000 it was offered to the University of Bristol’s Botanic Garden. The curator, Nick Wray, shared Tony’s vision and saw an opportunity to develop a new collection of medicinal plants and after successfully raising £10,000 develop part of the Botanic Garden as a dedicated area for the teaching of traditional Chinese herbal medicine.

Tony has been practising Chinese medicine for 25 years and is a past President of the Register of Chinese Herbal Medicine. He runs his own herbal dispensary in Bristol and is a leading authority on the cultivation and conservation of Chinese herbs.

The University of Bristol Botanic Garden has been created within the grounds of The Holmes at Stoke Bishop, just off Durdham Down. The garden, which opened in March 2006, focuses on four themed plant collections: (i) Plant Evolution, (ii) Plants of Mediterranean Climate Regions, (iii) Useful Plants, and (iv) Local Flora and Rare Native Plants, carefully chosen to fulfil the teaching, research and conservation requirements of a small university Botanic Garden in the 21st century.

The sacred lotus has deep religious meaning to Hindus and Buddhists, to whom the lotus flower symbolises beauty, purity and divinity Nelumbo nucifera has been in cultivation in China for more than 3,000 years, and has been grown for its cultural and ornamental value, for medicinal use and for food.

Directions to The Holmes