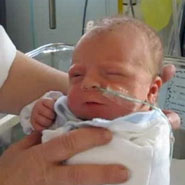 Riley Joyce, the first baby to receive the treatment

In a world first, xenon gas has been successfully delivered to a newborn baby in a bid to prevent brain injury following a lack of oxygen at birth. This pioneering technique was developed by Professor Marianne Thoresen of the University of Bristol and carried out at St Michael’s Hospital, part of University Hospitals Bristol NHS Foundation Trust.

Every year in the UK, more than 1,000 otherwise healthy babies born at full term die or suffer brain injury caused by a lack of oxygen and/or blood supply at birth.  This can lead to lifelong problems such as cerebral palsy.

The use of xenon gas to prevent brain injury was developed by Professor Thoresen with Dr John Dingley of Swansea University, in a study funded by Sparks, the children’s medical research charity.

The University of Bristol and St Michael’s Hospital have pioneered new treatments for brain injury in babies since 1998 when Professor Thoresen first started cooling babies after a lack of oxygen and showed that this technique could reduce damage in the newborn brain.

Professor Thoresen’s original laboratory work from 1995 had shown that cooling after lack of oxygen reduced brain injury in animal models.  Clinical trials in humans then proved that mild cooling by only a few degrees for 72 hours is a safe and beneficial treatment.  However, cooling only partially reduces disability and does not prevent it in all babies.  The search thus began for a second treatment that could be added to cooling to further reduce disability.

Professor Marianne Thoresen said: “Xenon is a very rare and chemically inert anaesthetic gas found in tiny quantities in the air that we breathe.  In 2002 John Dingley and I realised the potential xenon and cooling might have in combination to further reduce disability.  Over the past eight years, we have shown in the laboratory that xenon adds to the protective effect of cooling on the brain; however we faced the challenge of how to successfully deliver this rare and extremely expensive gas to newborn babies.”

Dr Dingley has been developing equipment in Swansea for xenon anaesthesia in adults for over 10 years and has invented a machine to successfully deliver the gas to babies.  His machine takes the exhaled gas, removes any waste products from it and re-circulates it to be breathed again without any loss at all to the outside air.  Some types of specialist military diving equipment work in this way but it is very unusual to build a system small enough to work reliably in newborn babies.

Dr Dingley said: “A key design feature of this machine is that it is very efficient, using less than 200ml of xenon per hour – less than the volume of a soft drinks can.  Xenon is a precious and finite resource and difficult to extract so it can cost up to £30 per litre.  As even newborns breathe many litres of air per hour, any xenon based treatment would be impossibly expensive without an economical delivery method.

“Despite these challenges, the lack of side-effects and brain protecting properties of xenon make it uniquely attractive as a potential treatment to apply alongside cooling in these babies.  We are very grateful to Sparks, the children’s medical research charity, for supporting us in making this happen.”

Following rigorous Medicines and Healthcare Regulatory Authority approvals and other regulatory challenges, the device is now authorised for clinical trials and will be used on a minimum of 12 babies over the coming months.  Successful completion of this feasibility trial is the first required step before larger trials can be done in baby units on a larger scale.

Professor Thoresen and Dr Dingley’s previously successful research work into cooling and the increased survival chances offered by xenon have been funded through the children’s medical research charity Sparks, which has committed almost £800,000 to the team’s pioneering work.