What makes a meal tasty? 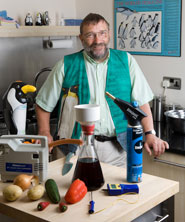 Professor Pete Barham, who has worked extensively with celebrity chef Heston Blumenthal, argues in a scientific paper published by the American Chemical Society, that the hot topic of ‘Molecular Gastronomy’ should not be considered a style of cooking but a new scientific discipline.

Why do some foods taste terrible when others are absolutely delicious? Is it the ingredients, the way they have been grown and cooked, or simply the mood we are in today?

Professor Pete Barham, from the University of Bristol, who has worked extensively with celebrity chef Heston Blumenthal, argues in a scientific paper published by the American Chemical Society, that the hot topic of ‘Molecular Gastronomy’ should not be considered a style of cooking but a new scientific discipline.

Several highly regarded chefs have had their cooking style described as ‘Molecular Gastronomy’; others claim to be bringing the use of scientific principles into the kitchen. The scientific community, however, has not really kept pace, despite individual scientists advising some of these chefs.

“To me a kitchen is just like a science laboratory and cooking is just another experimental science”, says Barham.

“To understand what it is that makes one dish delicious and another not, we need to consider not only the choice of ingredients and how they were grown; the manner in which the food was cooked and presented; but also the environment in which it was served and the mood of the diners.

“All play a part in our enjoyment of food and there are valid scientific reasons why each affects the final result.”

In this study, Barham and colleagues from Denmark and South Africa bring together the many strands of chemistry that are increasingly being used in the kitchen, in order to provide a sound basis for further developments in the area. Their basic premise is that the novel combinations of textures and flavours, developed through the application of chemical and physical techniques in some restaurant kitchens, has led to a new enjoyment and appreciation of food.

All this begs the fundamental question: why should these novel textures and flavours provide so much real pleasure for the diners?

To identify this will involve understanding many branches of the chemical sciences: agrochemicals are involved in the way food is produced; chemical changes occur during harvesting, packaging and transport to market, and subsequently during processing and cooking; finally, an understanding of neurochemistry will be required in order to discover how the brain reacts to the presentation and taste of the food.

The aims of this new science of Molecular Gastronomy should be to elucidate what the minimal conditions are that make food taste good, in order to find ways in which they can be met – through the production of raw materials, in the cooking process, and in the way in which the food is presented.

“Taken to its extreme”, Barham argues, “It should be possible to quantify just how delicious a particular dish will be to a particular individual. Thus, in the future, it may be possible to serve different variations of the same dish to your dinner party guests so that each has their own uniquely enjoyable experience”.