The colour of dinosaur feathers identified 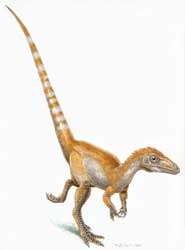 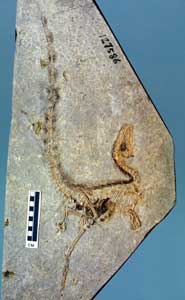 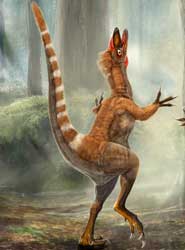 Reconstruction of a Sinosauropteryx © Jim Robins

The colour of some feathers on dinosaurs and early birds has been identified for the first time, reports a paper published in Nature this week.

The colour of some feathers on dinosaurs and early birds has been identified for the first time, reports a paper published in Nature this week.

The research found that the theropod dinosaur Sinosauropteryx had simple bristles – precursors of feathers – in alternate orange and white rings down its tail, and that the early bird Confuciusornis had patches of white, black and orange-brown colouring. Future work will allow precise mapping of colours and patterns across the whole bird.

Mike Benton, Professor of Palaeontology at the University of Bristol, said, “Our research provides extraordinary insights into the origin of feathers. In particular, it helps to resolve a long-standing debate about the original function of feathers – whether they were used for flight, insulation, or display. We now know that feathers came before wings, so feathers did not originate as flight structures.

“We therefore suggest that feathers first arose as agents for colour display and only later in their evolutionary history did they become useful for flight and insulation.”

The team of palaeontologists from the University of Bristol, UK, the Institute of Vertebrate Paleontology and Paleoanthropology (IVPP) in Beijing, University College Dublin and the Open University report two kinds of melanosomes found in the feathers of numerous birds and dinosaurs from the world-famous Jehol beds of NE China.

Melanosomes are colour-bearing organelles buried within the structure of feathers and hair in modern birds and mammals, giving black, grey, and rufous tones such as orange and brown. Because melanosomes are an integral part of the tough protein structure of the feather, they survive when a feather survives, even for hundreds of millions of years.

These discoveries confirm the substantial body of evidence that suggests birds evolved through a long line of theropod (flesh-eating) dinosaurs. It also demonstrates that the unique assemblage of characters that make a modern bird – feathers, wings, lightweight skeleton, enhanced metabolic system, enlarged brain and visual systems – evolved step-by-step over some 50 million years of dinosaur evolution, through the Jurassic and Cretaceous periods.

“These discoveries open up a whole new area of research”, said Benton, “allowing us to explore aspects of the life and behaviour of dinosaurs and early birds that lived over 100 million years ago.

“Furthermore, we now know that the simplest feathers in dinosaurs such as Sinosauropteryx were only present over limited parts of its body – for example, as a crest down the midline of the back and round the tail – and so they would have had only a limited function in thermoregulation.

“Feathers are key to the success of birds and we can now dissect their evolutionary history in detail and see how each feather type – and the fine detail of feather structure – was acquired through time.  This will link with current work on how the genome controls feather development.”

Further information on melanosomes can be found here.