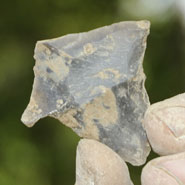 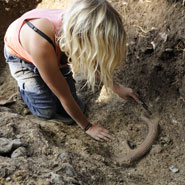 Archaeologists have discovered evidence of a lost stone circle on the west bank of the River Avon, a mile from Stonehenge. The new circle, being called ‘Bluestonehenge’, is 10m in diameter and was surrounded by a henge – a ditch with an external bank.

The new circle, being called ‘Bluestonehenge’, is 10m in diameter and was surrounded by a henge – a ditch with an external bank.

The circle of stones – no longer present – would have marked the end of the Avenue, a 2.8 km processional route that leads from the River Avon to Stonehenge, which was constructed at the end of the Stone Age (the Neolithic period). The outer henge around the stones was built around 2400 BC, but arrowheads found in the circle indicate the stones were erected as much as 500 years earlier.

Excavations in August-September 2009 by the Stonehenge Riverside Project – a consortium of universities including the University of Bristol – uncovered the nine stone holes, part of a circle of probably 25 standing stones. Most of the circle remains unexcavated, preserved for future research, whilst the 2009 excavation has now been filled back in.

The stones from the new-found circle were removed thousands of years ago but the sizes of the holes in which they stood indicate that this was a circle of bluestones that were brought from the Preseli mountains of Wales 150 miles away, like the inner stones at Stonehenge.

When the stones from the newly-discovered circle were removed by Neolithic people, it is possible that they were dragged along the route of the Avenue to Stonehenge, to be incorporated within its major phase of rebuilding around 2500 BC.  Archaeologists know that after this date Stonehenge consisted of some 80 Welsh blue stones and 83 local sarsen stones. Some of the bluestones that once stood at the riverside probably now stand within the centre of Stonehenge.

Dr Josh Pollard, from the University of Bristol and co-director of the project, explained: “This is an incredible discovery. The newly-discovered circle and henge should be considered an integral part of Stonehenge rather than a separate monument. Furthermore, it offers tremendous insight into the history of its famous neighbour. Its riverside location demonstrates once again the importance of the River Avon in Neolithic funerary rites and ceremonies.”

The builders of the stone circle used deer antlers as pickaxes. Within the next few months, radiocarbon dating of these antler picks will provide more precise dates and reveal whether the circle was built at the same time as Stonehenge itself (in the decades after 3000 BC) or at some other time.

In the meantime, the discovery of this unknown stone circle may well be exciting confirmation of the Stonehenge Riverside Project’s theory that the River Avon linked a ‘domain of the living’ – marked by timber circles and houses upstream at the Neolithic village of Durrington Walls (discovered by the Project in 2005) – with a ‘domain of the dead’ marked by Stonehenge and this new Bluestonehenge circle.

There is no evidence that the circle had a particular orientation or even an entrance.  Soil that fell into the holes when the stones were removed was full of charcoal, showing that plenty of wood was burned here.  Yet this was not a place where anyone lived: the pottery, animal bones, food residues and flint tools used in domestic life during the Stone Age were absent.

Professor Mike Parker Pearson, from the University of Sheffield and principal director of the project, said: “It could be that Bluestonehenge was where the dead began their final journey to Stonehenge.  Not many people know that Stonehenge was Britain’s largest burial ground at that time. Maybe the bluestone circle is where people were cremated before their ashes were buried at Stonehenge itself.”

Professor Julian Thomas, a co-director from Manchester University, added: “The implications of this discovery are immense. It is compelling evidence that this stretch of the River Avon was central to the religious lives of the people who built Stonehenge. Old theories about Stonehenge that do not explain the evident significance of the river will have to be re-thought.”

The Stonehenge Riverside Project is run by a consortium of university teams. It is directed by Professor Mike Parker Pearson of Sheffield University, with co-directors Dr Josh Pollard (Bristol University), Professor Julian Thomas (Manchester University), Dr Kate Welham (Bournemouth University) and Dr Colin Richards (Manchester University). The 2009 excavation was funded by the National Geographic Society, Google, the Society of Antiquaries of London, and the Society of Northern Antiquaries. The overall project is funded by the Arts and Humanities Research Council and the Royal Archaeological Institute.
Please contact Cherry Lewis for further information.