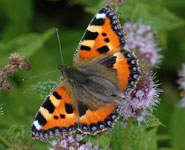 A small tortoiseshell butterfly: one of the 563 species of insects reared from the 20 farms. Jane Memmott 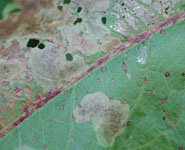 A leaf miner on a dock leaf: many leaf miners were reared on the project, either a small fly emerges or a parasitic wasp. Jane Memmott

Research on farms in the South West has shown that a leaf-destroying insect is preyed upon by parasites to the same degree on conventional farms as on organic farms. The team, led by Professor Jane Memmott at the University of Bristol, studied natural pest control on conventional and organic farms and found no difference between the two systems.

A study of natural pest control on conventional and organic farms in the southwest has found no difference between the two systems.

The team, led by Professor Jane Memmott at the University of Bristol and funded by the Biotechnology and Biological Sciences Research Council (BBSRC), has shown that caterpillars are attacked by parasites to the same degree on both conventional and organic farms.

The research adds to a body of work that aims to find out which farming methods and practices yield the optimum crop production, with minimum impact on the environment. Up until now it has been asserted that increased biodiversity on organic farms would equate to better natural pest control than on conventional farms, but this work suggests that in fact natural pest control can be as effective on either type of farm.  The research will be published in the March edition of Ecology Letters.

The work confirms that there are indeed more species of both plants and insects on organic farms than on conventional farms – a result that may seem obvious – however, previous studies have given contradictory results because they have been small in scale and narrowly focused.

This study is on a uniquely large scale to include the whole farm system, taking into account fields where crops are grown as well as non-crop areas such as hedgerows and woodland.  The results suggest that in fact natural pest control is no better or worse in either farm system, at least in the South West of England where this study was conducted.

Professor Memmott said: “We looked across a whole farm system at which species were present and who was eating whom.  Although we were expecting to get the result that the organic farms had more species – that’s common sense really – we were waiting with anticipation for the results of the pest control experiments to come through.

“What we’ve found is that the conventional farms in the South West are actually doing rather well in this respect. This is quite likely due to the preservation of hedgerows and wooded areas, but to confirm this, we will need to compare these results with, say, the South East where farms are much bigger and fields cover a greater area and tend not to have hedges.”

Dr William Symondson from Cardiff University added “It is sometimes forgotten that the increase in species diversity and abundance on organic farms may mean that there are not only more predators but also more prey for them to attack. Thus, the ratio of predators to prey (including pest species) may be the same, which could explain our finding.”

To find out how effective natural pest control is on each farm, the researchers introduced a so-called ‘sacrificial herbivore’.  In this case a non-native species of leaf miner – an insect that eats leaves from the inside out – that feeds on the shrub Pyracantha was introduced, along with a small patch of Pyracantha plants.  Then they monitored how well the leaf miners did in the face of natural pest control by organisms such as parasitic wasps, which occur naturally in the farm environment.  The leaf miners were controlled equally as well on both types of farm.

Scientists have traditionally looked to so-called indicator species such as bumble bees and farmland birds as a measure of biodiversity.  However, rather than focusing in on just one group, Professor Memmott, with Sarina Macfadyen and Rachel Gibson, used a method that gives a holistic picture of the ways in which a whole community of species interact.  This gives a much more complete picture of biodiversity, as well as uncovering interactions that can have a profound impact on a community’s response to species loss, stress and ecological restoration.  Moreover, these interactions are the basis of ecosystem services such as pollination or, in this case, pest control.

The work was funded by the Biotechnology and Biological Sciences Research Council (BBSRC). Professor Janet Allen, Director of Research, BBSRC said: “Global food security depends on growing enough crops but we have to ensure that increased production does not introduce risks to ecological systems.

“Finding out which aspects of different farming methods and practices offer the best of both worlds i.e. increased crop yields and a better protected environment is the best way to build a picture of the optimum farm system for the future.  This BBSRC-funded work adds valuable information to the pot of knowledge about farm systems that will ensure we can feed a growing world population in the future.”