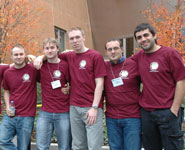 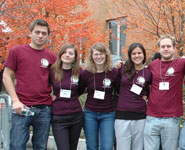 A team of students from the University of Bristol has beaten 84 other teams, including some from the best universities in the world, in a prestigious competition to genetically engineer a machine.

A team of students from the University of Bristol has beaten 84 other teams, including some from the best universities in the world, in a prestigious competition to genetically engineer a machine.

The competition was held at MIT (Massachusetts Institute of Technology), one of the USA’s leading academic institutions, and the Bristol team beat contenders from world-leading universities such as Princeton and Cambridge to win Best Model. The team also won a bronze medal. It was the first time Bristol had ever entered the competition which started in 2003.

The Bristol University team’s idea was to create microscopic builders, or ‘Bacto-builders’, which might do things like remove toxins from drinking water. To do this they investigated the possibility of utilising large numbers of E.coli bacteria, working together in a co-ordinated manner, to push particles around.

Assembling particles at microscopic scales into desired patterns or structures is currently so difficult as to be virtually impossible.

“The ultimate goal is to make collective behaviour emerge by engineering the bacteria to adhere to a set of simple rules so that particles are assembled according to the desired pattern. Furthermore, patterns or structures could be evolved in real time with bacteria adapting to changing conditions or autonomously forming new structures,” said Professor Mario Di Bernardo, one of the supervisors of the Bristol team.

To achieve this they first created a mathematical model and simulation software which they tested on Blue Crystal, the University’s new supercomputer, and it was for this that they won the Best Model prize.

“It’s great to win one of the prizes” said Tom Gorochowski, one of the student members of the team. “The team did some excellent work and it will be fun to start filling up the trophy cabinet.”

Professor Di Bernardo concurred: "It was amazing. Our team did really well. All of the judges really appreciated our work and the award we got was a great success. I am really proud of what the team achieved. "

At the beginning of the summer, all student teams were given a biological kit of DNA parts called ‘bio-bricks’ and, working at their own institutions over the summer, they designed and engineered biological systems and operated them in living cells. As well as developing their mathematical model, they also created two new biobricks in the lab that will be important to achieve their ultimate goal. They then took their design to MIT for the iGEM (International Genetically Engineered Machine) Jamboree where they were assessed against all the others.

The Bristol team of nine students came from a range of departments, including the Bristol Centre for Complexity Sciences, Biology, Biochemistry and Engineering Maths, making it a truly interdisciplinary project.

Apart from the fun of entering the competition, the project design and competition format is an exceptionally motivating and effective teaching method.