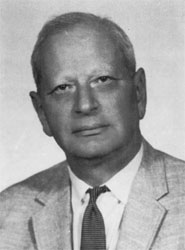 This October marked 100 years since the birth of Hans Heilbronn (1908-75), after whom the University’s Heilbronn Institute is named.

This October marks 100 years since the birth of Hans Heilbronn (1908-75), after whom the University’s Heilbronn Institute is named. Established in October 2005, the Heilbronn Institute brings together high-calibre mathematicians from various disciplines to conduct research into key areas of mathematics. A three-day conference at the Institute in September will celebrate Heilbronn’s life and work.

Heilbronn was a mathematician who worked on number theory and it was while he was at Bristol in 1934 that he achieved the work for which he is most famous – solving the Gauss Class Number Conjecture that had foxed mathematicians for more than 100 years.

Heilbronn was born into a middle-class, Jewish-German family and in 1926 entered the University of Berlin, reading first medicine then mathematics and natural science. It was during his time at university that Heilbronn acquired his duelling (or bragging) scar. At the turn of the 20th century, the duelling scar was popularised by upper-class Austrians and Germans, who saw it as a mark of class and honour, signifying their inclusion in an elite social rank. It is interesting, however, that no scar is evident on any of the photographs of him – they have presumably been re-touched.

Mathematics soon became Heilbronn’s main interest and in 1930 he became assistant to Edmund Landau at Göttingen University. In 1931, he gained his PhD for a thesis using analytic methods to improve prime number estimates. He began to make a name for himself with his first few papers on prime numbers and analysis, but Hitler’s rise to power in 1933 effectively barred academic careers for Jews in Germany, so Heilbronn moved to Britain where he obtained a one-year position at Bristol University. His work at that time represented important steps in number theory, an area of research that has remained active both here at Bristol and in other major centres of mathematics around the world.

In 1935, Heilbronn was awarded a Bevan fellowship at Trinity College, Cambridge, where he remained until 1940, when, like many other refugees, he was interned. Following service with the British forces in the Signal Corps, he returned to Bristol University in 1946 and was Professor and Head of the Mathematics Department from 1949 to 1964. Dr Bill Banks, a student at the time, remembers coming for an interview to study in the department: “At the end of the interview, they seemed to say I could come, pending my A-level resluts. I then asked if they needed a character reference. Heilbronn responded by saying that they assumed I would behave like a perfect gentleman.” This was typical of Heilbronn, whose rather formal manner, strong German accent and duelling scars could be rather overwhelming at first. Nevertheless, his friendly attitude won him many friends, although his intellectual honesty did not allow him to pass over anything he considered below standard.

Heilbronn was elected a Fellow of the Royal Society in 1951 and was President of the London Mathematical Society from 1959 to 1961. But in the early 1960s, feeling concerned that government plans for university expansion would lead to a drop in standards, Heilbronn tried to convince policy makers of the dangers that lay ahead. When this had no effect, he resigned his chair at Bristol with characteristic directness. He moved to a chair in the Mathematics Department at the University of Toronto in the later 1960s, where he built up an active research school. He died in 1975 during an operation to implant a pacemaker, aged only 66.