Birth of a new ocean 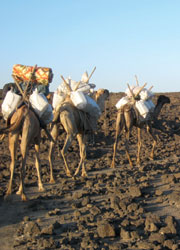 In a remote part of northern Ethiopia, the Earth’s crust is being stretched to breaking point.

In a remote part of northern Ethiopia, the Earth’s crust is being stretched to breaking point, providing geologists with a unique opportunity to watch the birth of what may eventually become a new ocean. Lorraine Field, a PhD student, and Dr James Hammond, both from the Department of Earth Sciences, are two of the many scientists involved in documenting this remarkable event.

The African continent is slowly splitting apart along the East African Rift, a 3,000 kilometre-long series of deep basins and flanking mountain ranges. An enormous plume of hot, partially molten rock is rising diagonally from the core-mantle boundary, some 2,900 kilometres beneath Southern Africa, and erupting at the Earth’s surface, or cooling just beneath it, in the Afar region of Ethiopia. It is the rise of this plume that is stretching the Earth’s crust to breaking point.

In September 2005, a series of fissures suddenly opened up along a 60-kilometre section as the plate catastrophically responded to the forces pulling it apart. The rapidity and immense length of the rupture – an event unprecedented in scientific history – greatly excited geologists, who rushed to this very remote part of the world to start measuring what was going on. It began with a big earthquake and continued with a swarm of moderate tremors. About a week into the sequence, eruption of the Dabbahu Volcano threw ash and rocks into the air, causing the evacuation of 6,300 people from the region, while cracks appeared in the ground, some of them more than a metre wide. The only fatality was a camel that fell into a fissure. While these movements are only the beginnings of what would be needed to create a new ocean – the complete process taking millions of years – the Afar event has given geologists a unique opportunity to study the rupture process which normally occurs on the floor of deep oceans. In order to do this research, a consortium of universities was formed and divided into five interdisciplinary working groups. Each group has its own aims and experimental programme whilst linking with, and providing results to, the other groups.

Lorraine Field is studying the Dabbahu volcano, located close to where the rifting event occurred, which had never been known to erupt before it woke up in September 2005. Following a very strong earthquake, locals reported a dark column of ‘smoke’ that rose high into the atmosphere and spread out to form an umbrella-shaped cloud. Emissions darkened the area for three days and three nights. Many of the lava flows on the mountain are made of obsidian, a black volcanic glass, and the fissure which opened in 2005 emits fumes and steam with a very strong smell of bad eggs. Water being extremely scarce, the local Afaris have devised an ingenious method of capturing it. They build a pit next to a fumarole that is emitting steam and gases. A low circular retaining wall is then built around the fumarole and topped with branches and grasses. These provide a condensing surface for the vapour which collects in the pit or ‘boina’. Of some concern, however, is the level of contamination in the water from the various chemicals and minerals found in volcanic areas. Occasionally goats have died from drinking this water, so in order to test its quality the locals hold a shiny piece of obsidian over the fumarole. If a milky deposit forms, this indicates a ‘bad’ boina, so they move on to the next. Members of the consortium have brought back some water to analyse in the hope of developing a device, similar to the Aquatest kit reported in the last issue of re:search, but which tests for toxic metals rather than bacteria.

In September 2005, a series of fissures suddenly opened up along a 60km section as the plate catastrophically responded to the forces pulling it apart

Field’s base was in a small village called Digdigga, which comprises a long main street with a mix of square houses built of wood and traditional round Afar houses, made of a lattice framework of sticks covered in thatch, skins and sacking. Digdigga has a concrete school building, the grounds of which became Field’s base camp for nearly three weeks in January this year. The village is situated on an immense, flat, windy plain surrounded by volcanic mountains and cinder cones. Due to the lack of any vegetation, everything quickly becomes covered in a layer of dust, but the bare rocks mean that satellite images can be used to measure the way the Earth’s surface changes as faults move and as molten rock moves up and along the fissures within the rift valley.

Conditions are still too extreme for normal field mapping and so representative rock samples from key locations have been collected. In order to access Dabbahu mountain, the team hired eight camels to carry supplies, taking enough food and water for six days (and an emergency day), and keeping in touch with the base camp by satellite phone. The rocks Field collected will be analysed to determine how the chemistry of the magmas varies at different locations and how it changes over time. This in turn gives information about the depth of the magma chambers within the crust and the relationship between rifting and volcanism in this area.

James Hammond is using a variety of seismological techniques to image the crust and mantle beneath Afar. For example, seismic waves are generated during earthquakes, so a network of 40 seismometers has been set up across the plate boundary zone to record seismic activity. One of the seismic stations was placed in the chief’s house, close to the summit of Erta Ale. This extraordinary volcano is essentially an open conduit right down into the mantle. By comparing the arrival times of seismic waves at the seismometers, Hammond and his team will be able to generate a three-dimensional image of the crust, crust-mantle boundary, mantle structure and base of the lithosphere across the study area. This will allow some constraints to be placed on the location of melt in this region, enabling the team to obtain information on the mechanisms of break-up involved in the rifting process. In a nutshell, the consortium has the best array of imaging equipment deployed anywhere in the world to help it ‘see’ into an actively rifting continent.

But all this work will not just benefit the scientific community; it will also have an immediate impact on understanding and mitigating natural hazards in Afar. Consequently, the teams work closely with Ethiopian scientists and policy makers in the region. In addition, the project will provide training for Ethiopian doctoral students and postdoctoral researchers, and Ethiopian scientists will be trained in the techniques used by the consortium. Over the next five years, scientists from the UK, Ethiopia and many other countries will all come together to further our understanding of the processes involved in shaping the surface of the Earth.

The Afar Rift Consortium involves scientists from the universities of Bristol, Leeds, Cambridge, Edinburgh and Oxford and has links with others in the US, Ethiopia, France and New Zealand.