Which way ‘out of Africa’? 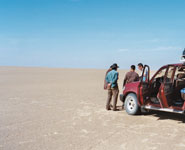 The widely held belief that the Nile valley was the most likely route out of sub-Saharan Africa for early modern humans 120,000 year ago is challenged in a paper published this week.

The widely held belief that the Nile valley was the most likely route out of sub-Saharan Africa for early modern humans 120,000 year ago is challenged in a paper published this week in the Proceedings of the National Academy of Sciences.

A team led by the University of Bristol shows that wetter conditions reached a lot further north than previously thought, providing a wet ‘corridor’ through Libya for early human migrations. The results also help explain inconsistencies between archaeological finds.

While it is widely accepted that modern humans originated in sub-Saharan Africa 150-200 thousand years ago, their route of dispersal across the hyper-arid Sahara remains controversial. The Sahara covers most of North Africa and to cross it on foot would be a serious undertaking, even today with the most advanced equipment.

Well-documented evidence shows there was increased rainfall across the southern part of the Sahara during the last interglacial period (130-117 thousand years ago). The Bristol University team, with collaborators from the universities of Southampton, Oxford, Hull and Tripoli (Libya), investigated whether these wetter conditions had reached a lot further north than previously thought.

Anne Osborne, lead author on the paper said: “Space-borne radar images showed fossil river channels crossing the Sahara in Libya, flowing north from the central Saharan watershed all the way to the Mediterranean. Using geochemical analyses, we demonstrate that these channels were active during the last interglacial period. This provides an important water course across this otherwise arid region.” The critical ‘central Saharan watershed’ is a range of volcanic mountains formerly considered to be the limit of this wetter region.

The researchers measured the isotopic composition of snail shells taken from two sites in the fossil river channels and from the shells of planktonic microfossils in the Mediterranean. Despite being hundreds of kilometres from the volcanic rocks in the mountains of the Saharan watershed, these shells had a distinctly volcanic ‘signature’, very different from the other rocks surrounding the sites. Water flowing from these volcanic mountains is the only possible source of this signature.

Dr Derek Vance, senior author on the paper, added: “The study shows, for the first time, that monsoon rains fed rivers that extended from the Saharan watershed, across the northern Sahara, to the Mediterranean Sea. These corridors rivaled the Nile Valley as potential routes for early modern human migrations to the Mediterranean shores.”

The similarities between Middle Stone Age artefacts in places like Chad and the Sudan, with those of Libya, strongly support this theory. “We now need to focus archaeological fieldwork around the large drainage channels and palaeo-lakes to test these ideas” said Nick Barton, a contributor to the project from the University of Oxford.

The paper: ‘A humid corridor across the Sahara for the migration of early modern humans out of Africa 120,000 years ago.’ Anne H. Osborne, Derek Vance, Eelco J. Rohling, Nick Barton, Mike Rogerson, and Nuri Fello. PNAS has scheduled it for online publication on its Early Edition: www.pnas.org_cgi_doi_10.1073_pnas.0804472105
Please contact Cherry Lewis for further information.