New research could lead to a vaccine for pneumococcus disease 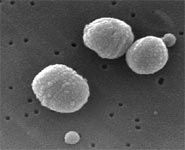 New research has shown how the immune system detects and destroys the bug, pneumococcus, which could help in the development of a new vaccine against the disease.

New research has shown how the immune system detects and destroys the bug, pneumococcus, which could help in the development of a new vaccine against the disease.

Pneumococcus is a bacterium which causes a lot of illness and disease in the very young and the elderly, including pneumonia and meningitis.  Large numbers of pneumonia deaths occur in children every year especially in poor countries.  Existing vaccines are not ideal for use in such countries and are also much too expensive.

Carriage of pneumococcus in the nose is a necessary first step for most infections. As children age, they carry pneumococcus for shorter periods of time and their risk of disease decreases also.  The mechanisms underlying this age-related decrease of carriage are not well understood.

As part of a continuing collaboration between labs at the universities of Bristol and Harvard, researchers have shed new light on how the immune system detects and destroys the bug when it colonises the nose.  The study is published today in PLoS Pathogens.

American researchers led by Drs Richard Malley and Marc Lipsitch have produced evidence for a key role for the recently described cytokine interleukin 17 in a mouse model of the infection. The Bristol group led by Professor Adam Finn have shown that immune cells from children’s tonsils, removed at surgery, also produce IL17 when stimulated with pneumococci.

The researchers have identified the immune cells that are responsible for this process, so-called TH17 cells, which release a factor that enables human blood cells to kill pneumococcus more efficiently.  They have shown that these TH17 cells exist in adults and children, but not in newborn babies, which suggests that they may arise as a consequence of humans being exposed to pneumococcus.

Professor Finn said: “Understanding how children build up immunity to pneumococcus will help the development of effective affordable vaccines for use where they are most needed.”

In the past, immunity to pneumococcus was thought to be due entirely to antibodies. This new research suggests that other mechanisms may be very important too.