Why is Greenland covered in ice? 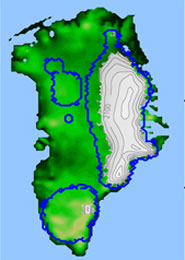 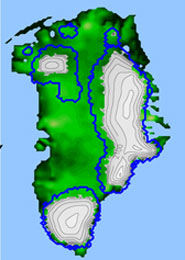 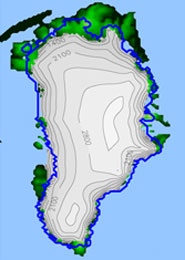 There have been many reports in the media about the effects of global warming on the Greenland ice-sheet, but there is still great uncertainty as to why there is an ice-sheet there at all.

There have been many reports in the media about the effects of global warming on the Greenland ice-sheet, but there is still great uncertainty as to why there is an ice-sheet there at all.

Understanding why the ice formed on Greenland three million years ago will help understand the possible response of the ice sheet to future climate change.

Dr Dan Lunt from the University of Bristol and funded by the British Antarctic Survey, explained: “Evidence shows that around three million years ago there was an increase in the amount of rock and debris deposited on the ocean floor around Greenland. These rocks could not have got there until icebergs started to form and could transport them, indicating that large amounts of ice on Greenland only began to form about three million years ago.

“Prior to that, Greenland was largely ice-free and probably covered in grass and forest. Furthermore, atmospheric carbon dioxide levels were relatively high. So the question we wanted to answer was why did Greenland become covered in an ice-sheet?”

There are several competing theories, ranging from changes in ocean circulation, the increasing height of the Rocky Mountains, changes in the Earth’s orbit, and natural changes in atmospheric greenhouse gas concentrations. Using state-of-the-art computer climate and ice-sheet models, Lunt and colleagues decided to test which, if any, of these theories was the most credible.

While the results suggest that climatic shifts associated with changes in ocean circulation and tectonic uplift did affect the amount of ice cover, and that the ice waxed and waned with changes in the Earth’s orbit, none of these changes were large enough to contribute significantly to the long-term growth of the Greenland ice sheet.

Instead, the new research suggests that the dominant cause of the Greenland glaciation was the fall from high atmospheric carbon dioxide levels to levels closer to that of pre-industrial times. Today concentrations are approaching the levels that existed while Greenland was mostly ice-free.

Dr Alan Haywood from the University of Leeds added: “So why did elevated atmospheric carbon dioxide concentrations fall to levels similar to the pre-industrial era? That is the million dollar question which researchers will no doubt be trying to answer during the next few years.”