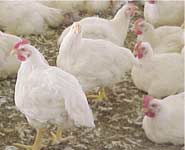 The huge increase in growth rates of broiler chickens means more than a quarter of these intensively-reared birds have difficulty walking, according to a comprehensive survey carried out by the University of Bristol.

The huge increase in growth rates of broiler chickens means more than a quarter of these intensively-reared birds have difficulty walking, according to a comprehensive survey carried out by the University of Bristol.

The study, funded by DEFRA and published on PLoSONE, identifies a range of management factors that could be altered to reduce leg health problems but warns that implementation of these changes would be likely to reduce growth rate and production.

A debate on the sustainability of current practice in the production of broiler chickens is urgently required, the researchers conclude.

The study found that at an average age of 40 days, over 27.6 per cent of birds showed poor locomotion and 3.3 per cent were almost unable to walk. The high prevalence of poor locomotion occurred despite culling policies designed to remove severely lame birds from flocks.

Dr Knowles said: “Broiler chickens have been subjected to intense genetic selection.  In the past 50 years, broiler growth rates have increased by over 300 per cent from 25 g per day to 100 g per day.

Other factors include the age of the bird, bird genotype, not feeding whole wheat, a shorter dark period during the day, higher stocking density, no use of antibiotic and the use of intact feed pellets.

Dr Knowles said: “The welfare implications of this study are profound.  Worldwide approximately 20 billion broilers are reared within similar husbandry systems that are biased towards economics of production and detrimental to poultry welfare.

“However, within the current framework there is variation in the magnitude of the problem between different flocks, and so some scope to improve walking ability through alterations in husbandry practice.

“Work needs to be carried out on the predictability of these risks, and the economics of improved welfare practices, for them to gain industry acceptance.

“Research shows that consumers currently know little about how broiler chickens are reared but can be shocked when presented with information about current commercial practices.  Since the sustainability of intensive broiler production depends on continued consumer acceptance of the farming practices involved, the broiler industry will need to work with the scientific community to develop more robust and healthier genotypes and to ensure that optimal husbandry and management practices are fully implemented.”