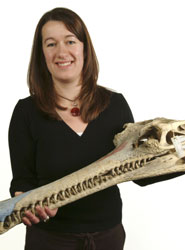 An unusual British dinosaur has been shown to have a skull that functioned like a fish-eating crocodile, despite looking like a dinosaur. It also possessed two huge hand claws, perhaps used as grappling hooks to lift fish from the water.

An unusual British dinosaur has been shown to have a skull that functioned like a fish-eating crocodile, despite looking like a dinosaur. It also possessed two huge hand claws, perhaps used as grappling hooks to lift fish from the water.

Dr Emily Rayfield at the University of Bristol used computer modelling techniques – more commonly used to discover how a car bonnet buckles during a crash – to show that while Baryonyx was eating, its skull bent and stretched in the same way as the skull of the Indian fish-eating gharial – a crocodile with long, narrow jaws.

The research is published in the latest issue of the Journal of Vertebrate Palaeontolology.

Dr Rayfield said: “On excavation, partially digested fish scales and teeth, and a dinosaur bone were found in the stomach region of the animal, demonstrating that at least some of the time this dinosaur ate fish. Moreover, it had a very unusual skull that looked part-dinosaur and part-crocodile, so we wanted to establish which it was more similar to, structurally and functionally – a dinosaur or a crocodile.

“We used an engineering technique called finite element analysis that reconstructs stress and strain in a structure when loaded. The Baryonyx skull bones were CT-scanned by a colleague at Ohio University, USA, and digitally reconstructed so we could view the internal anatomy of the skull. We then analysed digital models of the snouts of a Baryonyx, a theropod dinosaur, an alligator, and a fish-eating gharial, to see how each snout stressed during feeding. We then compared them to each other.”

The results showed that the eating behaviour of Baryonyx was markedly different from that of a typical meat-eating theropod dinosaur or an alligator, and most similar to the fish-eating gharial. Since the bulk of the gharial diet consists of fish, Rayfield’s study suggests that this was also the case for Baryonyx back in the Cretaceous.

“The CT-data revealed that although Baryonyx and the gharial have independently evolved to feed in a similar manner, through quirks of their evolutionary history their skulls are shaped in a slightly different way in order to achieve the same function. This shows us that in some cases there is more than one evolutionary solution to the same problem.”

The unusual skull of Baryonyx is very elongate, with a curved or sinuous jaw margin as seen in large crocodiles and alligators. It also had stout conical teeth, rather than the blade-like serrated ones in meat-eating dinosaurs, and a striking bulbous jaw tip (or ‘nose’) that bore a rosette of teeth, more commonly seen today in slender-jawed fish eating crocodilians such as the Indian fish-eating gharial.

The dinosaur in question, Baryonyx walkeri, was discovered near Dorking in Surrey, UK in 1983 by an amateur collector, William Walker, and named after him in 1986 by Alan Charig and Angela Milner.  It is an early Cretaceous dinosaur, around 125 million years old, and belongs to a family called spinosaurs.