Was it a bird or was it a plane?

Mock up of a Kuehneosaur flying over a Triassic landscape. Simon Powell 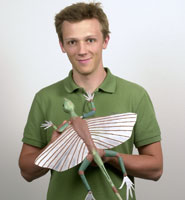 A new study of extinct reptiles called kuehneosaurs, by scientists from the University of Bristol, shows that these early flyers used extraordinary extensions of their ribs to form large gliding surfaces on the side of the body.

Archaeopteryx is famous as the world’s oldest bird, but reptiles were flying about some 50 million years earlier than that (225 million years ago), even before large dinosaurs roamed the Earth.

A new study of extinct reptiles called kuehneosaurs, by scientists from the University of Bristol, England, shows that these early flyers used extraordinary extensions of their ribs to form large gliding surfaces on the side of the body. The results are published today (15 July) in Palaeontology.

Kuehneosaurs, up to 70 centimetres (two feet) long, were first found in the 1950s in an ancient cave system near Bristol. Their lateral ‘wings’ were always assumed to be some form of flying adaptation, but their aerodynamic capability had never been studied before.

Koen Stein, who did the work while a student studying for an MSc in palaeobiology at Bristol University, has shown that of the of the two genera found in Britain, Kuehneosuchus was a glider (it has elongate ‘wings’), while Kuehneosaurus, with much shorter ‘wings’, was a parachutist. As the two forms are so alike in other respects, it is possible that they are males and females of the same animal.

Stein said: “We didn’t think kuehneosaurs would have been very efficient in the air, but all the work up to now had been speculation, so we decided to build models and test them in the wind tunnel in the Department of Aerospace Engineering at Bristol University/.

“Surprisingly, we found that Kuehneosuchus was aerodynamically very stable. Jumping from a five-metre tree, it could easily have crossed nine metres distance before landing on the ground. The other form, Kuehneosaurus, was more of a parachutist than a glider.”

So that Stein and his colleagues could work out how these creatures controlled their flight they had to model different skin flaps over the wing area. “We also built webbed hands and feet and had an extra skin membrane between the legs on the models, but these made the flight of the animals unstable, suggesting that they probably did not have such features.”

“This is a fantastic example of interdisciplinary research,” said Professor Michael Benton, a member of the research team and Head of Department in Bristol.  “Palaeontologists are keen to understand how all the amazing animals of the past operated and by collaborating with aerospace engineers we can be sure that model-making and calculations are more realistic.”