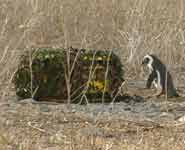 Ground-breaking technology that will enable biologists to identify and monitor large numbers of endangered animals, from butterflies to whales, without being captured, will be shown to the public for the first time at this year's Royal Society Summer Science exhibition [30 June to 3 July].

Ground-breaking technology that will enable biologists to identify and monitor large numbers of endangered animals, from butterflies to whales, without being captured, will be shown to the public for the first time at this year's Royal Society Summer Science exhibition [30 June to 3 July].

Scientists at the University of Bristol, working on Robben Island in South Africa, have devised an intelligent, visual surveillance system that can be integrated into wildlife habitats as a non-intrusive means of capturing detailed and reliable data on the population dynamics and social behaviour of endangered species.

The research advances techniques that originated in computer vision and human biometrics in order to help field biology and to better understand and conserve endangered species, in particular, the African penguin (Spheniscus demersus).

The project, called the 'Penguin Recognition Project', supported by the Earthwatch, the international environmental charity, and the Leverhulme Trust, has focused on the African penguin because their numbers have declined from more than a million at the start of the last century to fewer than 170,000 today.  The penguin population, on Robben Island, South Africa, is a population of nearly 20,000 and conventional tagging techniques can only monitor a few percent of the population. The aim of the Penguin Recognition Project is to develop a system capable of doing automatic monitoring and which, more generally, could be the solution to a real-world problem facing many ecologists.

African penguins carry a pattern of black spots on their chests that does not change from season to season during their adult life.  As far as scientists can tell, no two penguins have exactly the same pattern.  The researchers have developed a real-time system that can locate African penguins whose chests are visible within video sequences or still images.  An extraction of the chest spot pattern allows the generation of a unique biometrical identifier for each penguin.  These biometric data can then be used to identify individual, African penguins from video or photographic images by comparison with a population database.

Dr Tilo Burghardt, RCUK Fellow in Exabyte Informatics in the Department of Computer Science at Bristol University, said: "We believe the new technology developed will enable biologists to identify and monitor large numbers of diverse species cheaply, quickly and automatically."

Peter Barham, Professor of Physics at Bristol University and penguin fanatic, who originated the project added: "Once achieved, these systems will revolutionise the precision, quantity and quality of population data available to ecologists and conservationists. There will also be an animal welfare benefit since there is no need to expose the animals to the stress of capture, or side-effects of being marked."

Provided that a good image of a penguin can be extracted, the system can correctly identify the individual with around 98 per cent reliability. The current limitation of the system, based on one camera, is that some passing penguins are hidden behind others, or the lighting is poor. The researchers are currently working to overcome these limitations both by combining images from intelligent pan-tilt-zoom cameras, and by using infra-red imaging to provide data both day and night. The basic image-recognition system has also been trialled with zebras, sharks and, in principle, can be extended to any species with complex surface patterns.

The Royal Society Summer Science exhibition is the premier annual showcase for scientific excellence in the UK, and runs from 30 June to 3 July at the Royal Society in London.

The exhibit, SpotThePenguin, sponsored by the British Computer Society (BCS), is located in the Council Room, 1st floor.   Visitors to the stand will have the opportunity to win a place on the Earthwatch expedition South African Penguins, where they will spend two weeks contributing to this research project on Robben Island.  The trip is sponsored by Earthwatch.  To enter the competition people need to pick up a postcard at the Royal Society Summer Science Exhibition 2008 and follow the printed instructions.

The BCS has also encouraged and supported the initial project application to the Royal Society.

The Penguin Recognition Project is the flagship project of the COMBINE research collaboration at the University of Bristol.  It is conducted together with the Animal Demography Unit at the University of Cape Town, South Africa. The project is funded by the Leverhulme Trust, with long-term support in the field from Earthwatch and with pilot tests run in collaboration with Bristol Zoo Gardens.

For more information on the Penguin Recognition Project visit: www.spotthepenguin.com

The Royal Society Summer Science exhibition is a premier annual showcase for scientific excellence in the UK, and runs from 30 June to 3 July at the Royal Society, 6-9 Carlton House Terrace, London.

Original new music by Jean Hasse, Special Lecturer in Composition in the Department of Music at the University of Bristol, will be heard at the entrance to the SpotThePenguin exhibit. The music will create an aural background environment that ranges from calm and somewhat otherworldly to more energetic.

Inside the exhibit will be a sound collage of South African penguin calls and environmental sounds, allowing visitors a heightened experience of the habitat of the featured species.

Jean Hasse has put the collage together and Jonathan Scott, Department of Music Studio Manager, has mixed and mastered the music soundscape and the penguin sounds.

The research team for the project include Professor Innes Cuthill, a behavioural ecologist with particular interests in coloration and computational approaches to animal vision. Professor Peter Barham, a physicist and materials scientist, who devotes most of his energy to penguin biology and conservation. RCUK Fellow, Dr Tilo Burghardt and Dr Neill Campbell are the computer scientists.

The Bristol team's on-site collaborator is Professor Les Underhill, Head of the Animal Demography Unit at the University of Cape Town. The project is funded by the Leverhulme Trust, with long-term support in the field from Earthwatch, and with pilot tests run in collaboration with Bristol Zoo.

Earthwatch is an international environmental charity that supports scientific field research around the world; they work with teachers, students, young scientists, businesses and the general public. Earthwatch have been operating since 1971 and 90,000 volunteers have worked with their funded scientists in this time.

Earthwatch has been supporting the penguin research on Robben Island and sending volunteers from the general public to act as volunteer research assistants since 2001.

The British Computer Society (BCS) is the leading professional body for those working in IT with over 64,000 members in more than 100 countries. Its objects are to promote the study and practice of computing and to advance knowledge of and education in IT for the benefit of the public. BCS is also a registered charity.