The skull, the spider and the aircraft simulator 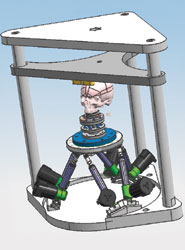 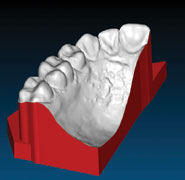 Dr Kazem Alemzadeh in the Bio-engineering research group of the Department of Mechanical Engineering has invented a Dental Robotic Testing Simulator called ‘Dento-Munch’ that can replicate human chewing, in order to test dental materials. The design inspiration was based on a human skull (structure), a spider (general look) and an aircraft simulator (dynamics and control of chewing).

The UK spends £2.5 billion each year on dental materials to replace or strengthen teeth, but despite the frequent use of metals, polymers and ceramics for tooth replacement or restoration, their properties – strength, hardness, wear and fatigue – are often poorly understood. Without this knowledge, the likely long-term performance of such materials cannot be assessed. While randomised clinical trials can test such materials, they are time-consuming and expensive, and by the time a new material has been evaluated, the market has often moved on. Laboratory simulators do exist, but they too have their problems in that they do not truly represent human chewing, so results from different simulators are often inconsistent. This lack of an adequate method of testing is hindering the development of dental materials.

The temporomandibular joint, more fondly known as ‘TMJ’, is arguably the most complex set of joints in the human body. It connects the lower jaw – the mandible – to the temporal bone at the side of the head. If you place your fingers just in front of your ears and open your mouth, you can feel the joint move on each side of your head. Because these joints are flexible, the jaw can move smoothly up and down and side to side, enabling us to chew our food, talk and yawn. In humans, the TMJ joint and the high versatility of our muscles enables the jaw to move with ‘six degrees of freedom’. It is therefore important that simulators can reproduce this same amount of ‘freedom’.

Given the space constraints of Dento-Munch, the muscles of the TMJ had to be placed outside the skull and are represented by mechanisms that introduce motion. This is similar to the design of an aircraft simulator. However, despite looking nothing like a human jaw, the lower platform on Dento-Munch plays the part of the lower jaw and is capable of moving in six degrees of freedom, due to the platform’s sophisticated controls. It therefore accurately mimics the chewing motion and forces in human jaws. It will soon be loaded with copies of real human teeth in order to test how implants, replacement or restored teeth might wear during use.

Using nothing more sophisticated than an office projector, a digital camera and some customised software, Alemzadeh has adapted a cheap way of imaging 3D objects. The Dental Optical Scanner, ‘Dento-OS’, as he calls it, will allow him to scan standard plaster casts of teeth made by dentists. The detailed 3D digital images that result will be used to machine replicas that will be loaded into the jaw. The potential of Dento-Munch and Dento-OS to improve the testing of dental materials was quickly recognised and the systems have now been patented in the US and the UK respectively. Ormco and Renishaw, specialists in orthodontics, have already shown great interest.