Grey Walter and his tortoises 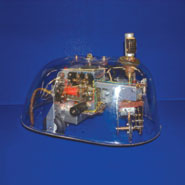 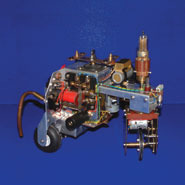 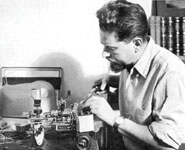 From the first autonomous robots to stem cells for treating multiple sclerosis.

The Burden Neurological Institute (BNI) has an international reputation for its work in clinical and experimental neuroscience. Based in the Burden Centre at Frenchay Hospital in Bristol, the BNI is a research unit specialising in the human nervous system and human neurological disorders. But as well as playing a significant role in today’s neuroscientific research, the BNI holds an important position in the history of neuroscience. For it was there that (William) Grey Walter, who was in charge for more than 30 years, created the first autonomous robots. His ‘tortoises’, complete with primitive neural pathways, led to new insights into the function of the nervous system, and to Grey Walter becoming recognised as a founding father of cybernetics.

In 1939 Walter moved to Bristol to open the BNI as a research centre in neuropsychiatry. He believed that the secret of how the brain worked lay in how it was wired up and wanted to prove that connections between a small number of brain cells could give rise to very complex behaviours. His first robots, Elmer and Elsie, constructed between 1948 and 1949, were mobile with a plastic shell that was phototropic – it could follow light – and acted as a bump sensor. The robots were designed to show the interaction between two sensory systems: light-sensitive and touch-sensitive control mechanisms (in effect, two nerve cells with visual and tactile inputs). These systems interacted with the motor drive in such a way that the tortoises exhibited ‘behaviour’; finding their way around obstacles, for example. They were described as tortoises due to their shape and slow rate of movement – and because they ‘taught us’ about the secrets of organisation and life.

The first autonomous robots were built at the Burden Neurological Institute in Bristol, in the 1940s.

In 1951 three new tortoises were displayed at the Festival of Britain and caused great interest, but after the Festival they were auctioned off and, it is believed, Elmer and Elsie were scrapped. In 1970 Walter suffered severe brain damage in a road accident which effectively ended his career. Only one tortoise remained which passed to Grey Walter’s son Nicolas, following his death in 1977. Nicholas stored the tortoise in his basement in Islington until 1995 where it was finally located after months of searching by Owen Holland, then Professor of Computer Science in the Intelligent Autonomous Systems laboratory (IAS) at the University of the West of England (UWE), in Bristol.

Holland carefully restored the tortoise to working order, but it was fragile and could not really be used for any extended experiments. The solution was to build replicas. The project commenced in 1995 and was greatly assisted by Bunny Warren, the designer of the 1951 batch, who still worked at the Burden Institute. He was able to produce many original records and spare parts, including some of the transparent perspex (Plexiglas) shells that he had been using as cloches in his garden. In a satisfactory repeat of history, the two replicas, Ninja and Amy, were demonstrated at the Millennium Dome, almost 50 years after the Festival of Britain. Today, Professor Alan Winfield at UWE looks after the surviving original; a replica is in the Science Museum.

In partnership with the University of Bristol, the IAS has now been renamed the Bristol Robotics Laboratory. Research there aims to further the understanding of systems that operate autonomously and exhibit intelligent behaviour; ie, make appropriate decisions without reference to any human assistance. At the Burden Neurological Institute, current projects include investigating movement disorders such as Parkinson’s disease and, most recently, the use of stem cells for treating multiple sclerosis. Grey Walter’s legacy to Bristol science has been comprehensive and wide-ranging.