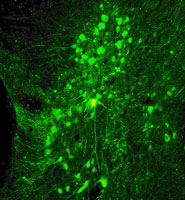 A single neuron (centre) in the perirhinal cortex which is involved in memory processes. Andy Doherty

By blocking certain mechanisms that control the way that nerve cells in the brain communicate, scientists from the University of Bristol have been able to prevent visual recognition memory in rats.

Our ability to remember the objects, places and people within our environment is essential for everyday life, although the importance of this is only fully appreciated when recognition memory beings to fail, as in Alzheimer’s disease.

By blocking certain mechanisms that control the way that nerve cells in the brain communicate, scientists from the University of Bristol have been able to prevent visual recognition memory in rats.

This demonstrates they have identified cellular and molecular mechanisms in the brain that may provide a key to understanding processes of recognition memory. The research is published online today [24 April] in Neuron.

Zafar Bashir, Professor of Cellular Neuroscience, who led the team at Bristol University said: “This is a major step forward in our understanding of recognition memory. We have been able to show that key processes controlling synaptic communication are also vital in learning and memory.”

The ability to recognise elements in the surrounding environment such as faces or places, as well as the ability to learn about that environment, is crucial to our normal functioning in the world. But the actual mechanisms and changes that occur in the brain and allow learning to happen are still not very well understood.

One hypothesis is that changes at the specialised junctions (synapses) between nerve cells in the brain, hold the secrets to learning and memory. The change in the strength of communication between synapses is called synaptic plasticity and, it is believed, the mechanisms of synaptic plasticity may be important for learning and memory. Bashir and his colleagues tested this hypothesis.

Professor Bashir added: “The next step is to try to understand the processes that enable visual memories to be held in our brains for such long periods of time, and why these mechanisms begin to break down in old age.”