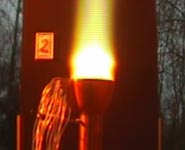 A team of engineers from Bristol University has conducted the first firing of the STERN rocket motor.

A team of engineers from Bristol University has conducted the first firing of the STERN rocket motor. Rocket engines equipped with the STERN (Static Test Expansion/Deflection Rocket Nozzle) rocket motor should benefit from increased performance in flight and achieving the firing test is a major step forward in a long term programme to understand the way these more complex nozzles work.

The first firing of the STERN rocket motor was conducted at 04:45 pm on Wednesday 19 March 2008 and was followed by a second firing an hour and half later. These are the first hot firings of rocket motors fitted with an Expansion Deflection (ED) nozzle in the UK and the first to use hydrogen and air as propellants. First analysis of the test results suggests that the motor performed as expected. More tests are planned over the next month to understand more fully the complex exhaust flow in this novel type of rocket.

The programme reached this first firing stage in less than a year. It has brought together engineers from Reaction Engines Ltd, Airborne Engineering Ltd and the University of Bristol in an attempt to quantify and validate the performance of Expansion Deflection (ED) nozzles. Rocket engines equipped with these devices should benefit from increased performance in atmospheric flight, as the nozzle compensates for the effect of changing ambient pressure, maximising thrust. This leads to an increase in payload delivered into orbit.

The STERN project is led by Dr Neil Taylor, Lecturer in Aerodynamics in the Department of Aerospace Engineering at the University of Bristol.

Dr Taylor said: “The flow within ED nozzles is extremely complex and not well understood. With the help of Reaction Engines I have been examining modelling techniques for the ED nozzle for nearly a decade, but this is the first time I've actually seen one fire. This test is a major step forward and should give us a much better insight into what's going on inside the engine.

“Test programmes like this usually take years and costs hundreds of thousands of pounds, but we've done this in 12 months and on a relative shoestring, the whole team has done a really good job but the guys from Airborne Engineering who designed, manufactured and assembled the test rig have worked near miracles. I’m looking forward to getting all the data back to the lab and seeing how it compares to my predictions.”

Reaction Engines Limited (REL) provided the financial backing and driving force behind both the STERN project and the previous ED Nozzle research at the University of Bristol. The aim is to use this nozzle in the Sabre engine that will power the Skylon reusable space launcher, where it would decrease the take-off runway length as well as increasing payload.

Alan Bond, REL Managing Director, said: “STERN represents a major step in the [ED research] programme. The first objective is to prove the computer model of the exhaust flow so we can have confidence in it when it’s used to design the nozzles for Sabre. On top of this, we’ve also been able to test the injectors [the holes that let the propellants into the engine’s combustion chamber] and the igniter [that ignites the propellants], that are the same as the designs intended for the Sabre engines.”

The STERN engine burns hydrogen and air (the same as the Sabre engine when in air breathing mode). Inside the combustion chamber the temperature exceeds 2,400K (2,137 C), and a pressure of one hundred times that of the atmosphere at sea level. Although the motor itself weighs less than 30 kg, it produces more than 5,000 N (half a tonne) of thrust.

Each firing is restricted to less than 2 seconds, as any longer and the (un-cooled) chamber walls could start to melt. However, the velocities in the flow are so high that the flow is stable within milliseconds, and the test time is more than adequate to generate accurate data.

The STERN (Static Test Expansion/Deflection Rocket Nozzle) is a static test engine – that is the engine is fixed to a test stand and does not move. This enables extensive instrumentation to be attached to the motor to fulfil the programme’s research objectives.