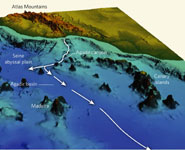 Details of the landslide and consequent sediment flow are reported online today in Nature by Dr Peter Talling from the University of Bristol, with colleagues from the National Oceanography Centre in Southampton and several other institutions.

Dr Talling said:  “The volume of sediment transported by this flow in the deep ocean is difficult to comprehend. It was one of the largest movements of material ever to occur on our planet. This mass was ten times that transported to the ocean every year by all of the Earth’s rivers. The flow was sometimes over 150 km wide, spread across the open sea floor.”

Perhaps the most remarkable thing about this giant submarine flow is that it travelled hundreds of kilometres without depositing any sediment on the vast expanse of sea floor that it passed over.

Sediment deposition was finally triggered by a remarkably small but abrupt decrease in sea-floor gradient (from 0.05˚ to 0.01˚). For comparison, most premiership soccer pitches have a gradient of less than 1˚ to help their drainage.

Man is placing more and more structures on the sea floor, including installations for recovering subsurface oil and gas reserves that can be worth hundreds of millions of dollars. Understanding the cause and evolution of these infrequent undersea flows helps to assess any potential hazards posed to such structures.

Installations involved in oil and gas recovery are typically sited on slopes of greater than 0.05˚. Cores collected next to these installations to help design their foundations are often used for subsequent geohazard analysis.

This work suggests that a more accurate record of these flows is found by coring in the low-gradient basin plains which may be hundreds of kilometres from the installations.