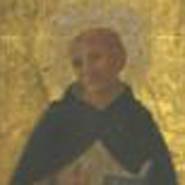 The discovery of two Fra Angelico paintings, one of the greatest artists of the early Renaissance, by Bristol University academic, Michael Liversidge, has been hailed as one of the most exciting art finds for a generation.

The discovery of two Fra Angelico paintings, one of the greatest artists of the early Renaissance, by Bristol University academic, Michael Liversidge, has been hailed as one of the most exciting art finds for a generation.

The panels, which measure a mere 15 inches by five inches, are a remarkable survival dating back to the 14th century. Each is painted with the standing figure of a Dominican Saint in tempera on a gold ground. The value of the panels is thought to be in excess of £1 million.

The paintings were spotted by Guy Schwinge of auctioneers Duke’s of Dorchester hanging behind the bedroom door of a house in Oxford. Mr Schwinge had been asked to carry out a valuation following the death of the owner. When Mr Schwinge contacted world expert Dillian Gordon at the National Gallery in London she identified the pictures as the work of Fra Angelico. It then transpired that she had already been shown the works by Michael Liversidge, formerly Dean of Arts and now a Senior Lecturer at Bristol University, who was friendly with the late owner and had spotted them on a visit to Oxford last year.

Mr Schwinge said: “As soon as I saw the panels I realised they had enormous potential, but there is no question that credit for this amazing find should go to Michael Liversidge.”

The house contained other art treasures, including a number of Pre-Raphaelite masterpieces, but the family were unaware of the significance of the two small paintings in the bedroom.

Michael Liversidge, said: “I was shown the paintings when I visited the owner, a Bristol alumna who died this year. Her pictures have now been passed to the administrators of her estate and Duke's will be selling them next year.

“I researched them and concluded they came from the frame of Fra Angelico's San Marco Altarpiece, one of the most important Florentine Renaissance altarpieces painted for Cosimo de Medici, dating from between 1439 and 1443.

“Experts at the National Gallery in London and the Metropolitan Museum in New York agreed with my opinion.  I am due to lecture on them at the British Institute of Florence, Italy, which is an Associated Institution of the University of Bristol, on Wednesday evening.

“The paintings are extremely important. They were commissioned by Cosimo de Medici, the greatest art patron of the Italian Renaissance. He commissioned the works in the late 1430’s for the High Altar at the Church and Convent of San Marco in Florence, where Fra Angelico himself lived. “

The two missing panels that have turned up in Oxford complete the set, which makes their rediscovery even more exciting. Guy Schwinge, said: “To put it in a nutshell we are dealing with two works of art painted by one of the ‘greats’, intended for his own Church and commissioned by one of the greatest art patrons in history. It simply does not get much better than that.”

Art experts from around the world have been stunned at the discovery. Laurence Canter of the Metropolitan Museum of Art in New York and a leading expert on Fra Angelico called it “very exciting” and Dillian Gordon of the National Gallery in London said: “This is quite breathtaking. It never ceases to amaze me how these things come to light.”