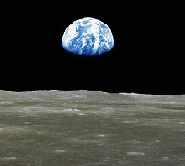 New research, published in Nature allows geologists to estimate the time at which the Earth's core separated from its rocky outer shell.

New research allows geologists to estimate the time at which the Earth's core separated from its rocky outer shell.

A paper  in this week's Nature [26 October 2005] shows how the problem can be resolved by considering the effect of a giant impact with the Earth.

Previous research, using two different types of radioactive 'clocks' (hafnium-tungsten and uranium-lead), appeared to give conflicting core formation times of about 35 and 80 million years, respectively, after the origin of the solar system.

The collision of a Mars-sized object with the Earth is thought to have contributed to the last ten percent of the Earth's mass, as well as forming the Moon.

Professor Bernard Wood, who completed this research while at Bristol University, and Professor Alex Halliday from Oxford University, propose that the impact would have also changed the conditions of core formation.

They put forward a model that explains the discrepancy between the two isotope clocks if the effects of the oxidation state of the mantle are taken into account.

The impact could have produced an oxidation state under which a sulphur-rich metal formed - of which the core is now composed. This oxidation state would have readily allowed lead to dissolve, effectively resetting the uranium-lead clock and resulting in the younger age.