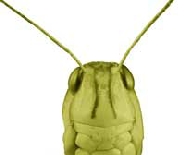 Physicists and biologists at Bristol University are using the way that insects hear to devise new instruments for use in nanoscience. Using these new tools will then allow them to look even closer at how insects hear.

The Atomic Force Microscope is the main tool used to obtain images at the atomic scale. Likened to an old fashioned record player, it has an ‘arm’ that houses a highly sensitive probe. Much like a stylus bumping around in the groove of a record, the probe moves across the specimen, mapping its shape by ‘feeling’ the bumps. The result is a three-dimensional map of the specimen’s surface. However, when examining delicate biological material, such as DNA, there is a risk that the probe might damage it.

By collaborating with colleagues in the Biology Department, Professor Mervyn Miles and his researchers in Physics have used the Atomic Force Microscope to ‘see’ the ways in which insects such as locusts and moths use their hearing systems to detect very faint vibrations. Understanding how this happens has helped them devise more sensitive instruments, with which to ‘see’ delicate biological materials.

Professor Daniel Robert from Biological Sciences said: “We actually borrow their tools to study our insects. In return, by understanding how biological systems have evolved to detect these tiny vibrations, technologists understand how to devise better instruments to detect vibrations.”

Nanotechnology draws on aspects of chemistry, physics, engineering, computer science and the various bio-disciplines. The past few years have seen an enormous expansion in our ability to manipulate the structures and properties of complex materials at the atomic level.

Recognition of the excellence of the work being done in this area at the University of Bristol has resulted in an Interdisciplinary Research Centre in Nanotechnology being jointly awarded to the universities of Bristol, Cambridge and University College London by the joint research councils, the Ministry of Defence and the Department of Trade and Industry. It is funded with £10 million for six years and has already attracted substantial further funding.

Interdisciplinarity is key to nanoscience research and is central to the philosophy of the Interdisciplinary Research Centre in Nanotechnology. Professor Miles said: “The excitement that we’ve had by working with biologists can be reproduced by bringing together chemists, engineers and mathematicians, into the new centre. There we will create new ideas and new directions and the whole process will occur at a much more rapid pace.”

A short newsclip featuring this work can be seen at www.research-tv.com/stories/technology/smarttech.Several groundbreaking discoveries have already spawned the creation of the University spin-out company, Infinitesima.