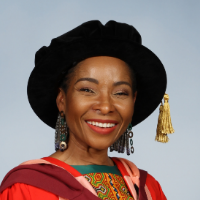 In 1953 in South Africa, the then Minister for Native Affairs, Dr HF Verwoerd, in a speech on the second reading of the Bantu Education Bill, said:

People who believe in equality are not desirable teachers for Natives…..What is the use of teaching the Bantu child mathematics when it cannot use it in practice? That is quite absurd (Verwoerd 1953: 3585).

Under apartheid the majority of Africans were denied access to any mathematics education. The legacy today is a system that still has marked inequalities in achievement in mathematics linked to, amongst other things, race, gender, socio-economic status, rurality and home language.

It is in this context that Professor Mamokgethi Phakeng (formerly Setati and lovingly known by most as ‘Kgethi’) has undertaken her exceptional and inspirational work in mathematics education in post-apartheid South Africa, where she has worked tirelessly to build institutions and create opportunities for others to access and thrive in mathematics. Her work has also had influence far beyond South Africa’s borders.

In 2002, Professor Phakeng earned her PhD, which focused on language practices in multilingual mathematics classrooms. In the same year she also became the President of the Association of Mathematics Teachers in South Africa (AMESA). Her leadership, energy, insight and drive over the next four years resulted in substantial growth in AMESA, and she did this work alongside her academic position at the University of Witwatersrand where, in 2005, she was appointed founding director of the Marang Centre for Mathematics and Science Education. She established Marang as a leading institution of its kind in Southern Africa, if not on the continent. At the same time, her critical research in multilingual mathematics education was published in prominent international journals.

This dual identity of researcher and professional educator has been a hallmark of Professor Phakeng’s work. In the past ten years she has extended her networks to private sector foundations, and to the National Departments of Basic Education and of Science and Technology,  and to the National Research Foundation (NRF), initiating and driving a collaboration that has funded key research and development projects in mathematics education at both primary and secondary level. In 2004 she set up the Adopt-a-learner Foundation, which provides financial and educational support to students from poor backgrounds to acquire higher education qualifications.

These multiple and inter-related roles have brought her to a position from which she has influenced the growth of mathematics education research and development in the country. Several of my esteemed colleagues past and present have had the privilege of working with Professor Phakeng on research into mathematics education, and all have spoken of how rewarding it is to work with her. It is precisely her ability to work across communities, encouraging collaboration and partnerships, that has resulted in widespread recognition and admiration.

Professor Phakeng’s work is all the more remarkable given its time and place. In most of her roles, she has envisioned and effected an approach towards mathematical learning of South Africa’s children in the post-apartheid era, the repositioning of mathematics teachers and the use of research in the service of teaching and learning. She is a role model par excellence, who continues to inspire through her institutional work and her personal interactions.

Mamokgethi Setati Phakeng is one of the most recognisable names in education in Africa today –not only because of the impact of her scholarship and her education development work, but also because of her networking skills and the savvy manner in which she uses social media to positively influence and inspire young people, especially those in higher education, to work hard in their pursuit of excellence. It is not surprising that in2014 CEO magazine named her the most influential woman in education and training (Academic) in Africa.

Professor Phakeng took over as Vice-Chancellor of the University of Cape Town in July 2018. That institution has already benefited much from her strong and decisive leadership style, as well as her ability to transact across different constituencies and levels of power and build relationships of trust with different university constituencies especially after the turbulent times of #RhodesMustFall and #FeesMustFall.

Professor Phakeng particularly stands out for her generous giving of her time and her willingness to engage with all who are committed to making a difference in education. While building her academic career, she simultaneously devoted time to building the mathematics teaching profession. Over the years, her  blog has shown her rising at 5am, travelling to give a talk to parents at a small school in a remote area, meeting with politicians and donors, interacting with her graduate students, giving a plenary talk at a conference and then rushing to the airport for a transatlantic flight for an international meeting. Today, she has a large following on social media and has created a movement, using hashtags #Past3amSquad and #MakeEducationFashionable, to encourage young people to pursue higher education. Her commitment and passion are truly exceptional and her enormous contribution to education in South Africa, at this relatively early stage of her career, is unprecedented. Her message to all, and particularly young and upcoming scientists, is that it is possible to play a leading role nationally and internationally in research, both to build a career and to benefit others.

She has inspired teachers and researchers alike, both within South Africa and across the world.

Vice-Chancellor, I present to you Prof Mamokgethi Phakeng as eminently worthy of the degree of Doctor of Science honoris causa.