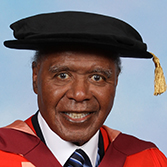 As the late Tony Benn, Former MP for Bristol East, political activist and friend, and also an honorary graduate of this University, wrote in the foreword of Paul Stephenson’s memoirs:

‘His life..offers living proof that history is made by the people who make the effort. It also shows that the initial hostility that they provoke is replaced by respect and good will if the effort continues long enough’

Paul was born in Essex in 1937 and educated at Forest Gate Secondary School in London, where he was the only black child. There is little doubt that it was this almost unique experience of being brought up as a black English boy at a time when Englishness and blackness were viewed as mutually exclusive, that influenced his life-long conviction to challenge racial discrimination and work towards bringing black and white communities together.

In 1953, at the age of 15, Paul joined The Royal Air Force where he served for seven years before completing   a Diploma in Youth and Community Studies at West Hill College, now part of the University of Birmingham.

As is so often the case in life, it was a chain of apparently minor events (including the throwing away of a newspaper, the sickness of a cleaner, the rummaging in the wastepaper bin) that led to Paul Stephenson’s appointment as Bristol’s first black social worker. A move that would transform race relations in Bristol as well as changing the political and social landscape of the whole of Britain.

Back in the Britain of 1962 black people had no legal protection from discrimination or injustice. As a result organisations and employers behaved in ways that are really shocking in today’s context. An example was the Bristol Omnibus Company, the local bus company at the time.  They were able, perfectly legally, to refuse to recruit black people on the basis of their race.  Paul Stephenson led a pioneering campaign against the Company. This campaign caught the imagination of the local and national media and became known as the Bristol Bus Boycott. Through this campaign the students of this very university were the first in Britain to march against racism. Within 6 months the campaign was successful. It is particularly significant  to note that the Bristol Omnibus Company eventually  announced that it would employ black people on the 28th August 1963, the very day that Martin Luther King delivered his ‘I have a dream speech’ to the crowds in Washington Square.

Paul Stephenson did not stop his campaigning against racism with the bus boycott. He went on to challenge the Bay Horse, a public house that refused to serve black people by asking to be served and refusing to leave until he was. He was arrested and had to face a court trial. He was ultimately acquitted when it was accepted that racism was at the heart of the issue. He would hardly have believed then that nearly 50 years later, in 2007, instead of being under lock and key, he would instead be offered the keys of the city as the first black person, and only the 50th person since 1888, to be placed on the Roll of Honorary Freemen of the City and County of Bristol.

Paul Stephenson’s political activism and fight against racism significantly contributed to Britain’s  first Race Relations Act in 1965, legislation that provided  the first step in  recognising  black people people’s civil rights. The significance of his contribution to this legislation was explicitly recognised some 40 years later at a reception held in his honour by the Commission for Racial Equality.

News of Paul Stephenson’s work reached the global stage and in 1964 he was invited to visit America where he had the experience of being the first black person to stay at the John Marshall Hotel in Virginia, which just weeks before had been a whites only hotel. He jokingly has said of this experience ‘I thought I’d come to give talks about racism in Britain not to desegregate the South!’

Paul Stephenson’s influence and experience cannot possibly be adequately reflected in this short speech. As well as Bristol he has worked in Coventry and in London where he struck up a great and long lasting friendship with the legendary boxer Muhammad Ali, with whom he set up the Muhammad Ali Sports Development Association. This organisation promoted sports development amongst young people in the inner city, as a means to develop self- confidence and social interaction between different racial groups living in disadvantaged and deprived economic circumstances.

Over the years Paul Stephenson’s work and contribution have been recognised through a range of prestigious awards. He also campaigned against apartheid in South Africa  for which he received an award from the United Nations. In 2009 he received the  Order of the British Empire for services to equal opportunities and to community relations in Bristol.  also the recipient of  Honorary Master’s from the University of The West of England and the Open University respectively .

When I met with Paul to prepare  this speech I was struck by the passion he still displays and even now as he approaches is 80th   year he remains focused on the challenges that black people and other minority groups continue to face, particularly regarding fair  access to good  employment , housing and education.

‘Every generation has a duty to fight against racism. It will find its way into our country and into our homes, addressing this challenge is our duty if we wish to seek a happy and prosperous existence’.

Mr Deputy Vice Chancellor, I present to you Paul Stephenson as eminently worthy of the degree of Doctor of laws honoris causa.