Besides the corpus of documents published on this website in spring 2013 (available via the Corpus of Documents), the following publications have arisen out of work done on this project.

This is a cluster of four articles in French edited by the research team, two of which were written by Vladislav Rjéoutski, together with a foreword by the team in English. The cluster arises in the main out of papers on education presented at the project conference on ‘French in Russia’ held in the University of Bristol from 12-14 September 2012. It was published on 1 November 2013 in the inaugural number of ВИВЛIОθИКА: E-Journal of Eighteenth-Century Russian Studies, an online journal of the Eighteenth-Century Russian Studies Association. These articles address a question that is key to the spread of French in eighteenth-century Russia, namely where, how and by whom French was taught and learned.

European Francophonie: The Social, Political and Cultural History of an International Prestige Language

This work of 160,000 words was published with Peter Lang in 2014. It originates in the seminar series on French in Europe that was organised in the University of Bristol in the calendar year 2012. The book is co-edited by the research team and includes their co-authored introductory chapter and conclusion and a chapter on Russia authored by Derek Offord. It establishes a pan-European context for the study of the history of French in Russia. More information can be found on the book's page on the Peter Lang website.

Click here for a brief description and table of contents (PDF, 67kB)

Foreign-Language Use in Russia during the Long Eighteenth Century

This is a cluster of four articles edited by the research team and published in the January 2015 issue of Russian Review. The introductory article, 'The Functions and Value of Foreign Languages in Eighteenth-Century Russia', is written by the research team. The other articles address the use of German, French and English in Russia during the long eighteenth century, and arise from papers presented at the project conference on ‘French in Russia’ held in the University of Bristol from 12-14 September 2012. The introductory article is open-access and is available under the following link: http://onlinelibrary.wiley.com/doi/10.1111/russ.10752/abstract

French and Russian in Imperial Russia

This work was published by Edinburgh University Press in June 2015. It consists for the most part of chapters arising from papers presented at the Bristol conference in September 2012, together with papers presented at a conference ‘Enlightened Russian’ at the Dashkova Centre in the University of Edinburgh from 30 August to 1 September 2012. The two volumes are co-edited by the research team in collaboration with Lara Ryazanova-Clarke of the University of Edinburgh and explore the interplay between French and Russian in Russia in the late eighteenth and early nineteenth centuries.

For full tables of contents and reviews, see the Edinburgh University Press website.

The French Language in Russia: A Social, Political, Cultural, and Literary History

We have also completed a co-authored monograph (702 pp.) which brings together all our findings, viz The French Language in Russia: A Social, Political, Cultural, and Literary History (Amsterdam: Amsterdam University Press, 2018). ISBN 9789462982727.

This book has been awarded two prizes: the 2019 Marc Raeff Prize, awarded by the Eighteenth-Century Russian Studies Association (ECRSA) and (as joint winner) the 2019 R. Gapper Book Prize awarded by the Society or French Studies (SFS).’

The French Language in Russia, which belongs to Amsterdam University Press's series ‘Languages and Culture in History’, is available in hardback at €45.00 and eBook PDF at €44.99.

Full details of the book, including a view of its table of contents, preface and introduction. 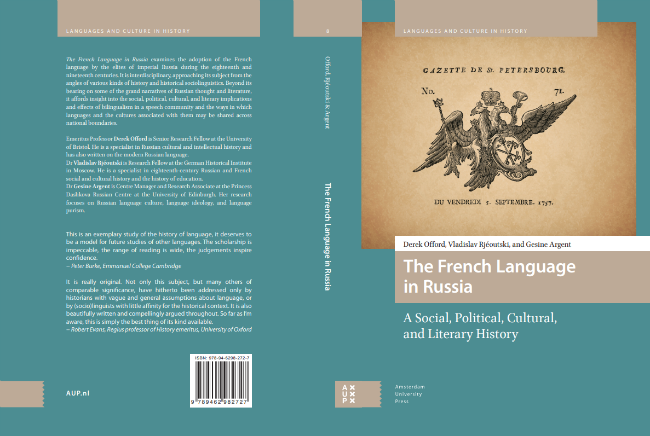