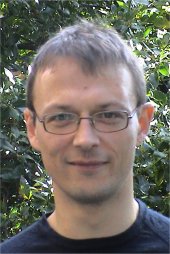 I study human behaviour in the context of our evolutionary history. My work has concentrated on perception of social properties of faces, particularly attractiveness. A lot of this work is strongly influenced by theories of sexual selection proposed by evolutionary biologists. I also have strong interests in the perception of emotion and the social perception of personality.

Dynamic stimuli convey more information with better ecological validity than static stimuli. We will create a large, dynamic stimulus set of walkers to authoritatively assess how different biometric and psychometric measures predict bodily attractiveness. We will also explore related social perception issues, such as how dynamic and postural sexual signalling affects perceptions of attractiveness, and associations between psychometric measures, behavioural cues and mechanical properties of motion. The stimulus set will be made available to other researchers interested in social perception, biological motion, and gait analysis, ultimately enabling further work in disciplines ranging from robotics to research in body image.

British Academy research grant (May 2007 - May 2009). With Rebecca Pearson and Jonathan Evans.

Growing evidence suggests that women’s perception of emotional expressions varies as a result of hormonal activity. For example, it has been demonstrated that women have better recognition of fearful facial expressions at stages of the menstrual cycle when oestrogen levels are high, and that expressions signalling nearby danger or contagion are more salient when progesterone is elevated. Functional (evolutionary) explanations for these phenomena suggest that such shifts in social perception may be adaptations to reduce the risk of disease or physical threat damaging the foetus during pregnancy, but no systematic work examining facial expression perception across pregnancy has been carried out to date. The research outlined here proposes to perform a longitudinal study of women across pregnancy to test adaptationist hypotheses of variability in the social perception of emotional expression.

Dynamic cues of proceptivity, signal direction, and their influence on attractiveness judgements

Attractiveness is a fundamental variable in our social lives, exerting considerable influence on our personal and professional relationships. Evolutionary approaches have proved fruitful in investigating this issue. Appearance affects attractiveness because physical structure conveys information about mate value (the long- and short-term reproductive benefits associated with a partner). Dyadic behaviour also provides information to potential mates, but has received less attention in evolutionary research. In this project, we are conducting a series of studies investigating the interactions between proceptivity, direction of signal, and the sex of both the receiver and signaller.

There is substantial current concern, in part following liberalisation of licensing laws in the UK, regarding the effects of alcohol on aggressive behaviour and violent crime. Our proposed research will inform this debate, and investigate the effects of alcohol on social perception, a potentially causal factor in aggressive behaviour. We aim to determine whether acute alcohol consumption in social alcohol users induces differences in sensitivity to perceptual cues of facial emotional expression.

Evolutionary biological models of mate preference have informed both psychological and anthropological studies of human facial attractiveness. Our increasing understanding of these preferences has produced new hypotheses predicting variability in preferences across varying ecologies and cultures. This project will integrate psychological tests with anthropological data from multiple populations to demonstrate how preference mechanisms produce biologically meaningful variability in response to the physical and social environment. Such novel interdisciplinary findings will represent an empirical and theoretical advance in psychology, biology and anthropology.

Adult attachment and the perceptual processing of facial expressions of emotion